To submit news, a designer diary, outrageous rumors, or other material, contact us at news@boardgamegeek.com. 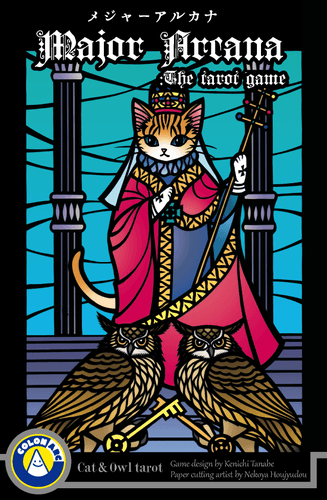 • Time for another round-up of game creations from Japan, starting with Major Arcana: The Tarot Game, which appears to be a straightforward memory game from Kenichi Tanabe of COLON ARC.

The game includes the 22 major arcana cards from a tarot deck — all bearing fetching cat illustrations by Nekoya Houjyudou — and to set up, you deal the cards out evenly among the 3-6 players. (Games with two players have special rules.) On a turn, you name a number, and whoever has that card (if anyone) places it face down in the center of the table. If you have only one card in hand, you may give two consecutive numbers instead of a single number, and both of those cards are discarded. If you run out of cards, you're out of the game, and whoever last has cards in hand wins.

That's it! Is there more to playing than remembering which numbers have been called? I don't know as I haven't played, but I love the cover art, so I wanted to highlight the game anyway.

• あ～した天気にニャ～れ!! (Wishing for Fine Weather!!), which debuted at the Tokyo Game Market in November 2019 from designer Dice-K and publisher ビストロ怪談倶楽部 (Bistro Kaidan Club), is a trick-taking game in which the players are cat gods who get to play with rain, snow, and other weather conditions. Some details:
Quote:
The game consists of a deck of fifty cards, with five suits of cards each numbered 1-10. Lightning is the trump suit, except that when snow (normally a losing suit) is played with lightning, then snow trumps lightning.

At the start of each of the three rounds, players reveal one of the eight scoring conditions to determine how many points positive or negative each card of a suit is worth in this particular round (-3 to +3). Players then play out the round, trying to collect tricks — or dodge them! — to maximize their score. 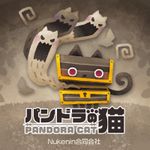 • Pandora Cat is, as far as I know, the first release from designer わけん (Reason) and publisher Nukenin合同会社, with the members of this group previously designing smartphone app games. This title was scheduled to debut at the Osaka Game Market in March 2020, but since that show was cancelled, the game is instead available through the Arclight shop set up to make doujin games available to a wider audience. (Note that this shop does not ship outside of Japan.)

Here's an overview of this 3-6 player card game:
Quote:
In Pandora Cat, a.k.a. パンドラの猫, you're racing to reach a points threshold before any other player can, but in each round you never know whether you want to score high or low until it's almost over.

Each round, each player is dealt four cards from the 24-card deck. Each of the eight types of cards has a value on it as well as a special ability. Each player chooses one card from their hand, then they reveal these cards in clockwise order from the starting player. Players then do this again two more times, leaving them with one card in hand.

Your score for the round is the sum of the value of the card in your hand and the value of the cards you played. Normally the player with the highest score earns 5 points, with the players in second and third earning 3 and 1 points respectively — but if a player has played two "Pandora Cat" cards, then the player with the lowest score earns 5 points! If two players have each played two "Pandora Cat" cards, then scoring is normal, whereas three players having done this reverses the score once again.

Rotate the start player position each round, and complete multiple rounds until a player has scored at least 12, 14, or 16 points in a three-player, four-player, or five- or six-player game.

• This entry is a cheat in this themed news item, but I'm running with it anyway. Scaredy Cat Dungeon from designer npckc and publisher yuzu labo is a press-your-luck game for 2-5 players in which you try to grab as much treasure as possible at the risk of losing it all. In more detail:
Quote:
There are two dungeon piles, and from the back of the cards you can tell which dungeon level they belong to. The deeper the level, the more treasures there are but also the more monsters there are. Each turn you decide whether to draw a card or go home. If you draw the third monster in a round, then everyone runs home and you lose all you collected this round, while other players who haven't gone home yet lose only one treasure.

Can you make it home with piles of loot, or will you just be another scaredy cat? 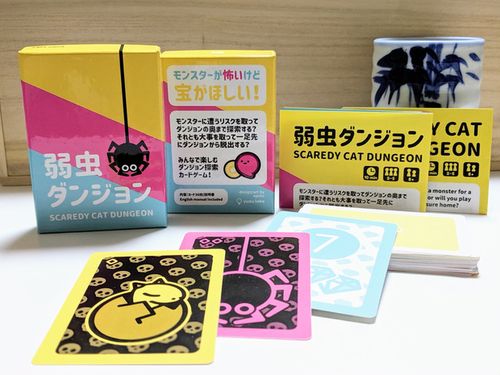