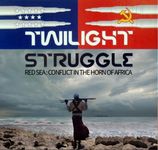 Fan-made cover
Continuing from my previous post about upcoming sequels and second editions, I'd like to hone in on a few GMT Games sequels on the horizon. While we don't have official release dates on any of these, it certainly gives us fans something to look forward to.

• Until recently, the idea of playing Twilight Struggle on your lunch break was absolutely bonkers! — unless, of course, you're lucky enough to have some kind of magical 2-4 hour lunch break. (If so, I envy you!) But now designer Jason Matthews has created Twilight Struggle: Red Sea – Conflict in the Horn of Africa! As part of GMT's Lunchtime series, Twilight Struggle: Red Sea is a two-player, card-driven game intended to create a tense gaming experience similar to big sister Twilight Struggle, but with a shorter playtime and a different setting as described by the publisher below:
Quote:
The year is 1974, and the Soviet Union and the United States have been locked in a life-or-death struggle across the globe. As so often happened during the Cold War, a relatively obscure region of the globe suddenly took center stage. Emperor Haile Selassie I of Ethiopia, a bedrock U.S. ally in Africa, had grown old and increasingly dictatorial. When he was overthrown in 1974, a Marxist coalition took the reins of power. This new revolutionary leadership initiated a chain of events that upset the regional balance of power and unleashed all the familiar elements of Cold War competition in the Horn of Africa. 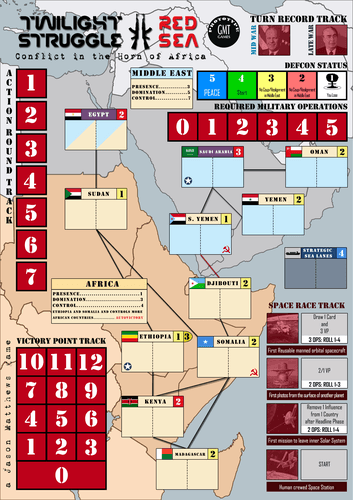 Playtest map posted by Matthews
With a more limited scope and much shorter playtime, Twilight Struggle: Red Sea is the perfect way to introduce new players to the Twilight Struggle system, while maintaining all the tension, decision making, and theme of the original classic. The cards from Twilight Struggle can be used in TS: Red Sea and vice versa.

• Craig Besinque's Conquest and Consequence is a World War II-era political strategy wargame designed for three players following in the footsteps of its distant cousin Triumph & Tragedy, which was originally released in 2015.

Similar to T&T, Conquest and Consequence spans the 1936-1945 time period, but this time in the Pacific/East Asia theater. One player represents the Militarist Japan faction seeking to replace the European colonial empires in East Asia, another player represents the Communist Soviet faction including Siberian USSR and the Red Chinese revolutions, and the third player represents the Capitalist USA faction consisting of the U.S., the British Empire, and the struggling regime of Nationalist China. Here's a high-level overview describing the gaming experience you can expect:
Quote:
The game combines the Pacific naval war and the land war in Asia (including the Chinese Civil War), both equally weighing upon victory. The naval war is dramatic, featuring short, decisive battles and expanded roles for airpower and island bases. In the tradition of Triumph & Tragedy, the three-sided aspect features negotiation, diplomacy, and subterfuge within a multitude of strategic possibilities. 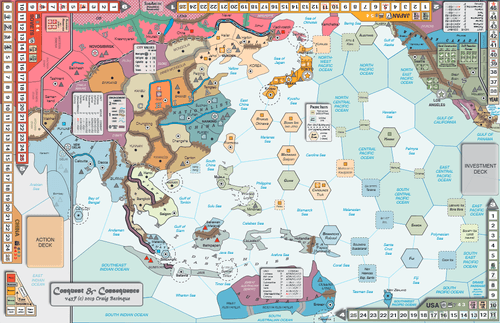 Playtest map
Like T&T, the game allows players freedom to diverge from the inclinations and policies of the historical actors and plays in 4-6 hours of constant tension and involvement.

• Last but certainly not least, we have Chad Jensen's Dominant Species: Marine, which Eric hipped us to in a March 2019 post. It was heart-breaking to hear the news that Chad Jensen passed away months later due to illness. Considering Dominant Species and the Combat Commander series alone, Jensen's influence on the gaming world is undeniable.

I was happy to read GMT's January 2020 newsletter in which the company mentions its commitment to Kai Jensen (Chad's wife and co-designer of Combat Commander: Pacific) to keep her husband's legacy alive by ensuring that all of his games remain in stock and honoring his memory with other projects that they'll announce in the coming months. The newsletter also mentioned that Dominant Species: Marine is moving swimmingly through the art department and toward production again. Jensen worked very hard to make this new version of Dominant Species even better while shortening the playing time. I'm hoping the reduced playtime means DS: Marine will hit everyone's tables more often! Here's an overview from the publisher to whet your appetite:
Quote:
Sixty-something millions of years ago: A great ice age has ended. With massive warming altering the globe, another titanic struggle for supremacy has unwittingly commenced between the varying animal species.

Dominant Species: Marine is a game that abstractly recreates a small portion of ancient history — the ending of an onerous ice age and what that entails for the living creatures trying to adapt to the slowly-changing earth.

Each player assumes the role of one of four major aquatic-based animal classes: dinosaur, fish, cephalopod, or crustacean. Each begins the game more or less in a state of natural balance in relation to one another, but that won't last. It is indeed "survival of the fittest." 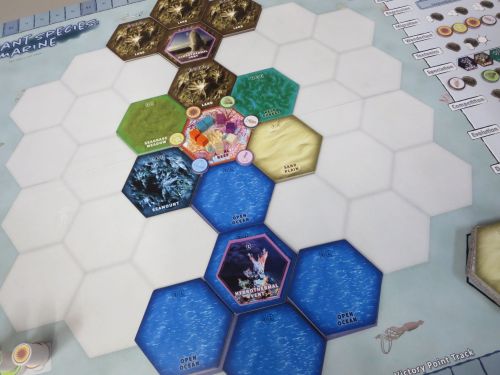 Prototype
Through wily action pawn placement, you attempt to thrive in as many different habitats as possible in order to claim powerful card effects. You also want to propagate your individual species in order to earn victory points for your animal. You are aided in these endeavors via speciation, migration and adaptation actions, among others.

All of this eventually leads to the end game — the final ascent of a vast tropical ocean and its shorelines — where the player having accumulated the most victory points will have their animal crowned the dominant species — but somebody better become dominant quickly as a large asteroid is heading this way...

---• Actions are taken immediately when a pawn is placed instead of waiting until all pawns are placed to execute actions in order. Gone are the days of having to plan out your entire turn ahead of time! This will offer players a bit more flexibility and should hopefully reduce some brain-burn when placing action pawns.

---• Dominance checks are no longer on a per-tile basis or relative to other players. Instead you check each element type over the entire earth and whether or not you dominate that particular element type is independent of whether any opponents also dominate it.

---• Animals no longer have default special abilities. Instead players each get to choose a trait card at the start of the game giving them a unique ability.