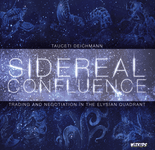 Sequels and second editions continue to be a trend in the world of board gaming. Fortunately, they are generally favored and considered improvements more often than not — you know, more Terminator 2: Judgment Day than Poltergeist II: The Other Side. Here are a few available for preordering that might be worth checking out:

• The tuned-up, "Remastered" edition of TauCeti Deichmann's sci-fi trading and negotiation sensation, Sidereal Confluence, is coming from WizKids in late May 2020. In Sidereal Confluence, 4-9 players represent unique, asymmetrical alien races simultaneously trading and negotiating with each other to acquire resources necessary to fund their economy, produce goods, and (ultimately) score the most victory points. In more detail:
Quote:
Each player chooses one of the nine unique and asymmetrical alien races that have come together to form a trade federation in their quadrant. Each race has its own deck of cards representing all the existing and future technologies it might research. Some races also have other cards related to unique features of their culture. These cards represent portions of the culture's economy and require spending some number of cubes to use, resulting in an output of more cubes, ships, and possibly victory points. Since each culture's outputs rarely match their inputs, players need to trade goods with one another to run their converters to create the resources they truly need to run their society most efficiently and have an effective economy. Almost everything is negotiable, including colonies, ships, and all kinds of resources. 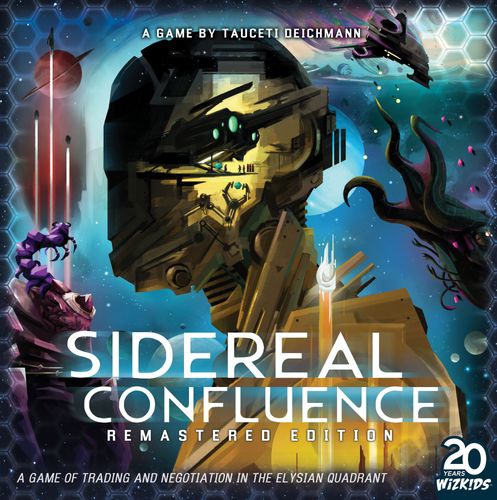 Each game round contains an open trading phase in which all players can negotiate and execute deals for cubes, ships, colonies, even the temporary use of technologies! Players with enough resources can also research technologies, upgrade colonies, and spend resources on their race's special cards during this phase. Once complete, all players simultaneously run their economies, spending resources to gain more resources. The Confluence follows, starting with players sharing newly researched technologies with all other races and following with bidding to acquire new colonies and research teams. Researching a new technology grants many victory points for the prestige of helping galactic society advance. When one race builds a new technology, it is shared with everyone else. Technologies can be upgraded when combined with other technologies.

The ultimate goal is victory points, which are acquired by researching technologies, using your economy to convert resources to goods, and converting your leftover goods into points at the end of the game.

The game is almost all simultaneous play.
The first noticeable difference between the original 2017 edition and the 2020 Remastered edition of Sidereal Confluence is the new, eye-catching box cover art from the renowned Kwanchai Moriya. Beyond the fresh and futuristic artwork are several updates intended to streamline the gameplay, which is welcomed for a game that can get fairly chaotic, especially at higher player counts:

—The Remastered edition includes a new and improved rulebook with more visual examples and clear key terms, plus a teaching guide to improve set-up and learning time.
—The card layout has been revamped with clearer iconography and color schemes.
—The resources have been updated so that it's easier to differentiate between the different sized cubes.
-- The differing ship tokens for each faction will be replaced with common ship tokens to avoid unnecessary confusion.

• The second edition of Peer Sylvester's 2-4 player, area majority/influence, thinky filler The King is Dead from Osprey Games is slated for release in July 2020.

Here's a high-level overview from the publisher if you're not familiar with this deep, quick-playing gem:
Quote:
The King Is Dead is a board game of politics and power struggles set in Britain in the chaotic period following the death of King Arthur. For the good of the country, a leader must unite the Scots, Welsh, and Romano-British — not by conquest but by diplomacy. 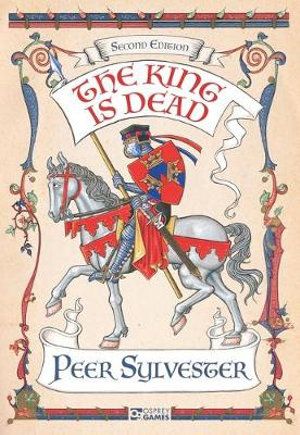 Players are members of King Arthur's court. Whether a loyal knight, a scheming lord, or an ambitious noblewoman, you all have one thing in common: power. As prospective leaders, each player uses their power to benefit the factions, gaining influence among their ranks. The player with the greatest influence over the most powerful faction is crowned the new ruler of Britain.
The second edition has been refreshed with updated graphic design, re-skinned with new medieval-flared artwork from Benoit Billion, and packaged with a new asymmetric game mode for advanced play — all in a more portable format than the original 2015 version.

I was only recently hipped to The King is Dead, but I dig how it has similar elements to Pax Pamir (Second Edition), specifically with the way the area majority/influence scoring works. The flexible hand-management mechanism gives you lots of choices for strategizing since you have the option of playing none, some, or even all of your eight action cards on any turn. It also adds an interesting twist with variable endings that lead to different victory conditions, similar to other Pax games that I enjoy. I can definitely appreciate the amount of depth packed into such a short and relatively simple game.

• In November 2019, Eric shared a SPIEL '19 photo of the newly announced Marco Polo II: In the Service of the Khan, which is Simone Luciani and Daniele Tascini's standalone follow-up to the dice-worker-placement classic The Voyages of Marco Polo. I think this one caught us all by surprise, although it's no surprise that I've heard nothing but good things about it, considering its older sibling's esteemed reputation. 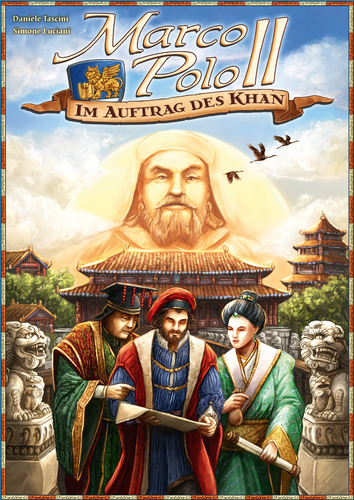 Marco Polo II is a standalone game based on The Voyages of Marco Polo, and you don't need the original game to play this one. This new journey will present unique challenges, with new and different actions, new scoring rules, and a new good: rare and valuable Chinese jade.

Retread old paths with renewed purpose, or find new ones as you explore farther west, continuing to build the immortal legacy of Marco Polo! 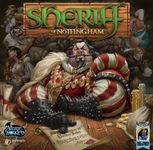 Here's a game description from the publisher that includes second edition updates:
Quote:
Will the merchants get their goods past the Sheriff?

The bustling market in Nottingham is filled with goods from all over the kingdom. Most of it is entirely legal, however, Prince John is looking to make sure no contraband gets sold. He's tasked the Sheriff to inspect merchant's wares, looking for any illicit goods. The Sheriff's shrewd, but not above taking a bribe to look the other way. Which merchant will end up getting the best goods through and make the largest profits in the market stalls? 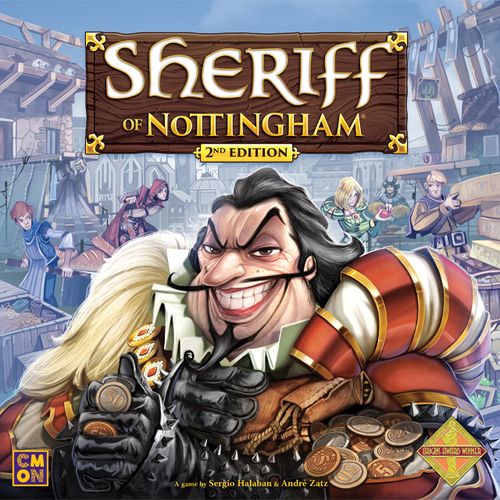 In Sheriff of Nottingham (2nd Edition), players take turns playing the Sheriff, looking for contraband goods, and the merchants trying to stock their stall with the best goods. The Sheriff can inspect any bag they want, but they must be careful as they'll have to pay a penalty if they find the merchants were telling the truth. This new edition includes updated rules, as well as expansions such as the sixth merchant, the Black Market, and Sheriff's deputies. 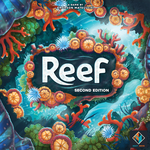 • In August 2020, Next Move Games plans to release a new edition of Emerson Matsuuchi's Reef, which first appeared in 2018. The only changes to the game are to the typography on the front cover and the color of the reef pieces. Says Next Move's Mike Young, "The team wanted more ambiance for the game, so more naturally occurring colors felt like a better fit." You can get a complete rundown of the game in Eric's video overview, but here's the short take:
Quote:
In the game Reef, players take on the role of a coral reef, carefully selecting colors and patterns in which to grow and expand. On each turn, players can choose to pick up a new card from a choice of four, or play a card that is already in hand. Each card provides two reef pieces and a pattern that scores points if the existing reef has it (after placing the two new pieces). Whoever has the most points when the reef pieces (or card deck) run out wins! 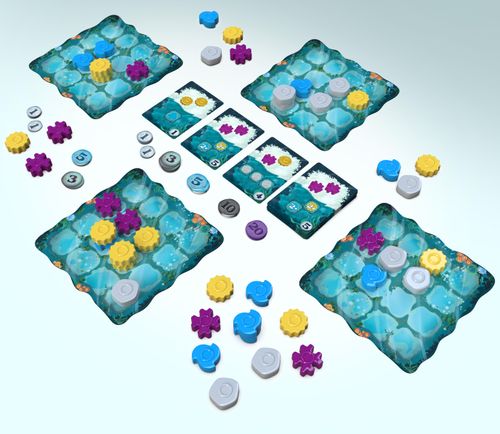