Patron Badge for 2004 through 2021
• On March 25, 2021, Alex Marshall of The NY Times profiled designer Matt Leacock and a game design currently in the works in an article titled "His Game Made Beating a Pandemic Fun. Can He Do It for Climate Change?"

The game in question is titled Climate Change Daybreak— as Leacock notes in this comment further down this page — and it's co-designed by Matteo Menapace (his website), with CMYK serving as the publisher. Here's an excerpt from the article:
Quote:
If the idea of making a fun game about surging diseases sounds like a tall order, Leacock said making entertainment out of climate change was even tougher. "I haven't ever tried to create a game that was faithful to science before," he said in a telephone interview from Sunnyvale, Calif., where he lives. 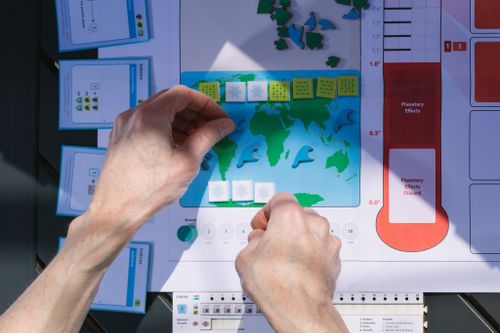 Image: Peter Prato for The New York Times
Pandemic was about creating a sense of tension, he said, but Climate Crisis has "higher ambitions." In addition to being entertaining, he hopes the new game can change people's actions in the real world.

"I've got a big opportunity to come up with a cooperative game that makes a difference," he said. "I don't want to blow it."
This Climate Crisis site has several articles from Menapace about the origins of their collaborative design effort, choices that have driven the design, and an overview of how the game works. In short:
Quote:
Each player controls a world power, deploying policies and technologies to both dismantle the engine of global heating and to build resilient societies that protect people from life-threatening crises.

If the global temperature gets too high, or if too many people from any world power are in crisis, everyone loses. But if you work together to draw down global emissions to net-zero, you all win!

• On March 23, 2021, Dan Thurot of Space-Biff! posted an article titled "Talking About Games: The Price Is Wrong" in which he explains why he no longer talks about a game's price in his reviews. A long excerpt:
Quote:
One of the most influential things I've ever read was a review.

I don't remember the author. It came from one of those tomes found way back in the university stacks, with curly golden letters on its spine and a layer of dust on the top edge. It spoke of the author's experiences with George Orwell's Nineteen Eighty-Four. Not in the usual way, in which the critic boasts about how everybody else is subject to doublethink, but not them, oh no, not them. Instead, the critic pointed out that Nineteen Eighty-Four didn't just talk about doublethink; old George snuck it into his readers' thoughts. The book tells you up front that its heroes Winston and Julia will be caught and broken. It repeats this fact so many times that it adopts the familiarity of a picture on the wall of your childhood home. You could identify it on sight, but possibly couldn't say where it was hung exactly. Familiarity becomes foreign. So familiar and foreign, in this case, and so bound up in the expectations of the genre and how heroes ought to behave and how good stories should conclude, that Orwell's readers often persuaded themselves that Winston and Julia could escape their fate. We knew they would not. But we also knew they would. That is doublethink. If we suffer from it reading a book, surely we all suffer from it in our real lives, especially when we're convinced we don't.

Regardless of the specifics, it had nothing to do with whether I should go out and purchase Nineteen Eighty-Four, or whether the book was worth $19.80 in hardback or $13.69 mass paperback or if I should wait for banned books week to grab it for free on the Kindle. Its author wasn't attempting to speak to me about Orwell's opus in commercial terms. Instead, the book was treated as a serious thing that had sparked serious thoughts, that operated in only limited fashion as entertainment while speaking plainly about cognitive dissonances and how those could be weaponized against a population's best interests.
This is the perspective that I take when writing or talking about games in reviews: I want to explore a game's structure, its feeling, how it works. Ideally that exploration has value on its own, regardless of whether you play the game, because it gives you some sense of what I think the designer was trying to do and whether it worked. Price never enters the discussion since I don't know how much money you have or what a game will cost you or whether you can borrow it — and even if I did know all that, those details would still be irrelevant since you know better than me what you value.

It would probably make more sense to talk about whether a game is worth your time (compared to your money) given how many games exist relative to the time you'll have on Earth, but even that discussion would be presumptuous given how (once again) you know better than me what you value. 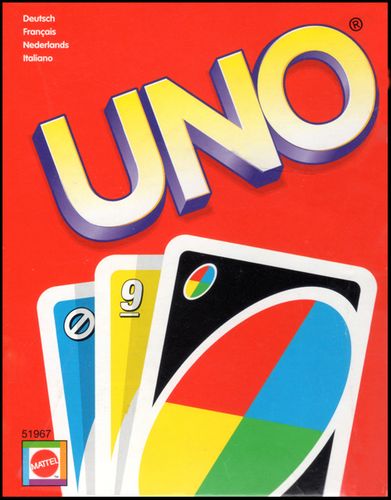 • I bookmarked a bunch of game news throughout February 2021 that hasn't yet made it into this space, so let me catch you up on two related items that you might already know about:

—In February 2021, Mattel announced that it was developing the card game UNO into a live-action motion picture — which sounds like a bizarre thing to do given what UNO is, but when you own the brand for the world's best-selling card game, I guess you want to figure out new ways to keep that brand in front of people. Here's an excerpt from the announcement:
Quote:
Mattel Films will produce the project alongside Grammy-nominated rapper Lil Yachty. In addition, Quality Control's Kevin "Coach K" Lee, Pierre "P" Thomas and Brian Sher will produce for Quality Films. Marcy Kelly penned the screenplay for the action heist comedy, set in the underground hip hop world of Atlanta. Robbie Brenner, executive producer, and Kevin McKeon, supervising producer, will lead the project for Mattel Films.

"At Mattel Films, we are looking to explore stories that bring our brands to life in unexpected ways," said Brenner. "UNO is a game that transcends generations and cultures, and we look forward to partnering with Lil Yachty, as well as with Coach, P and Brian Sher, to transform the classic UNO game into a comedic action adventure."

"I'm so excited to be part of this film with Mattel," added Yachty. "I played UNO as a kid and still do today, so to spin that into a movie based on the Atlanta hip hop scene I came out of is really special. It hits close to home for me."
—These news follows a November 2020 announcement, as reported by The Wrap, that Mattel landed a television deal for UNO. Here's an excerpt from that article:
Quote:
"The UNO Game Show" is described as a "larger-than-life televised competition" featuring four teams who will face off to become "the ultimate UNO champion". The planned show will incorporate audience participation, over-the-top physical challenges, and trivia.

...A previous game show adaptation was put into development in 2013 at The Gurin Company but did not move forward to series.

"UNO is the most popular game in the world and is a fixture in pop culture, making it the ideal franchise to build a reality game show around," [Mattel's Adam] Bonnett said in a statement.