Gain Prestige for Your Champagne in Dom Pierre, and Unite Ireland Through Might, Cunning, and Matrimony

Patron Badge for 2004 through 2021
• Yinzi designers Rôla and Costa are the creative minds behind the debut title from new publisher Pile Up Games, with the 2-4 player game Dom Pierre set to debut in Q4 2021 in a limited edition of 1,000 copies.

Here's an overview of the game, which features a gamified take on the production of champagne to give folks a change of pace from all the wine-production games already on the market:
Quote:
At the end of the 17th century, a French Benedictine monk in charge of the cellar at Hautvillers Abbey made an important contribution to differentiate wines from that region. As a result, it became possible to produce wines of superior quality, particularly in white wines made from black grape varieties. While Dom Pierre Pérignon initially felt the sparkling of the wine was a negative feature, the consequent increase in both quality and quantity created the path that lead to the appreciation and recognition of champagne. 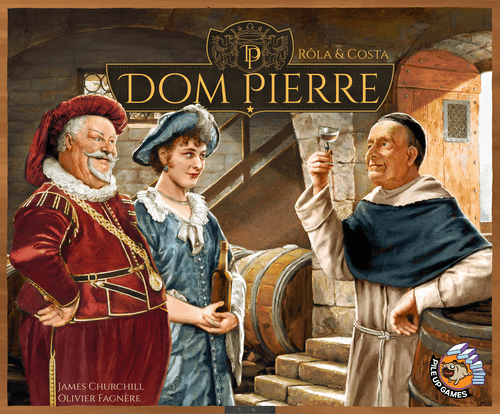 Throughout the 18th century, several "champagne houses" — or Champagne Maisons — were founded, and a new business dynamic grew in the region. These houses replaced small farm and monastery production in leading the evolutionary process of champagne, and by planting more vineyards or buying grapes from other producers or both, they mastered the specialization. To promote their product, the houses hired sales agents to take samples of their champagne wines to the Royal Courts of Europe, a crucial factor in generating the glamorous fashion of drinking champagne.

Despite production growth, improved quality, and increasing popularity, trade did not reach spectacular rates during the 19th century — which is why the game Dom Pierre is much more about winning prestige than earning money. In the game, you are responsible for one of the oldest Champagne Maisons, producing and selling wine all over Europe, not to mention the other side of the Atlantic. The local economy will be boosted, employment increased, and your brand will become universally recognized.

To make all this happen will require a chain of actions that starts in your vineyard. You will need to look for continuous improvement, constantly react to your opponents, and optimize your choices to build the most prestigious Champagne Maison. In game terms, on a turn you move up a disc on the winery game board and perform an action, with the actions become more powerful as the game progresses. You will plant in the vineyards, harvest crops, buy grapes from neighbors, make wines in your cellar (some more valuable than others), allocate salespeople on four market routes and workers in the vineyard and cellar, and acquire the necessary accessories to improve production.
• UK publisher Osprey Games has announced a new title from Peer Sylvester, designer of the previous Osprey releases The Lost Expedition, The King Is Dead, Village Green, and Let Them Eat Cake.

The new title is Brian Boru: High King of Ireland, a 3-5 player game due out in October 2021 that has a trick-taking element combined with game board elements that bring the design to a 60-90 minute playing time. Here's what Osprey has revealed about the game to date:
Quote:
In Brian Boru: High King of Ireland, you strive to unite Ireland under your domain, securing control through might, cunning, and matrimony. Join forces to fend off Viking invaders, build monasteries to extend your influence, and gather support in towns and villages throughout the land. To become High King of all Ireland, you need to navigate a web of shifting alliances, outmaneuver your enemies, and grab history by the reins. 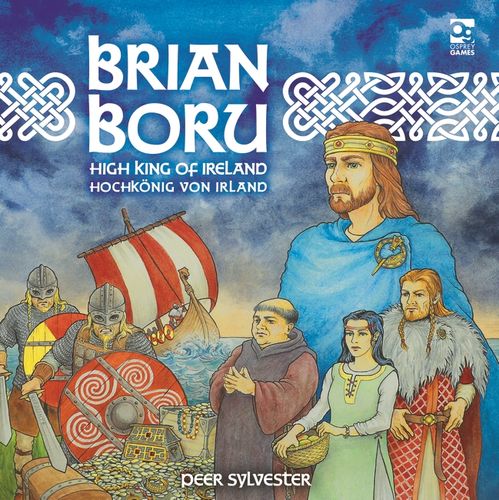 The success of the historical Brian Boru rested on three pillars: his victories against the Vikings, the favor he managed to garner with the Church, and the alliances he forged through political marriages. This became the foundation of the game, with each pillar becoming a suit in the trick-taking that forms the core of the mechanisms. Win a trick and you gain influence in a town, which, in turn, gains you majorities in the regions; if you lose the trick, however (deliberately or otherwise), you instead take an action corresponding to the suit of the card.