Quote:
Welcome, soldier! If you are reading this document, it means that your physical or mental capabilities are excellent and our planet needs you! You are joining a secret agency whose mission is detecting and blocking alien activity on Earth. Read further if you dare, but keep in your mind two simple truths:

You will be part of an elite squad formed by up to five agents involved in several critical, tactical missions. You will encounter hostile aliens, so be prepared to fight them and fire with no mercy.

That's your introduction to Galaxy Defenders, and it's followed by a huge list of game components, including plastic figures, dice, sheets, cards, tokens and markers. Looking over the materials and considering the theme, if I didn't already know that the designers – Simone Romano and Nunzio Surace – and publishers – Ares Games and Gremlin Project – were Italian, I'd swear that I was holding a new big box game from Fantasy Flight.

Due to my work covering the Italian game industry and organizing an annual convention in Modena, I was lucky enough to receive a preview copy of Galaxy Defenders. The rules and materials that were included are final versions of what will be in the box, but most of the plastic figures were missing (since they need to be produced once the final contents of the game are determined), the map tiles were only single-faced, and I didn't have all of the missions/maps from the final product. Still, I had enough to take me through two missions included in the preview game – Mission 1: Close Encounters and Mission X-play – and I've now played Mission 1 three times. 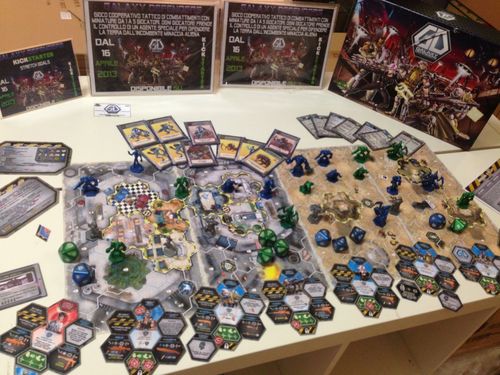 Contents of the base game
Galaxy Defenders is a pure collaborative game, with we, the players, being the Agents – that is, the protagonists – while the game system itself moves the bad guys, the Aliens. The base game includes at least twelve missions that you can play as standalone scenarios or (in what seems a much better option) as a full somewhat-linear campaign. I've seen some of the missions that have yet to be revealed, and the campaign flow looks intriguing with the different missions apparently providing vastly different play experiences.

To adjust the game's difficulty level, you can toggle certain optional rules on or off. Since I'm a gamer at heart but new to this game, I played my initial games at normal difficulty level, which means that I encounter no friendly fire and no in-campaign real pain – that is, the death of the Agents. The unpaginated rulebook that I received ran close to forty pages that are filled with examples and figures. (A final cleaning of the rulebook still needs to take place as I estimate the rulebook to be 90% okay at this point.)

Galaxy Defenders is played over a variable number of rounds, with the number being defined in each mission. Each round is subdivided into phases:

The battle phase is played in turn by each single operative (i.e., living) agent, while the other phases are played all together.

The refresh phase is an upkeep phase similar to the strategy phase, and the main part of these phases is electing the Alpha Agent who will be the leader and the first player to operate in the battle phase. It's an important choice as the Alpha Agent is the only one sure to be able to act before any aliens on the map can move – and since play goes clockwise around the table, the choice of Alpha Agent combined with seating order seems real important. I'm sure that after playing the game enough times you'll be able to play different strategies depending on the agents' playing sequence.

The battle phase is the core of the game. On his turn, an agent can move, combat, and take one action (use an ability, use a skill, use basic or improved tactic, use a device) in the order he prefers, with the most common combinations being the attack/move and move/attack. Using a device is also important as some devices, such as flash grenades or biotech droids, can have a big influence in the game. In most cases, you can also take an action to perform special activities related to the mission; in the first mission, for example, you have to use an action to destroy the aliens' teleport doors.

After the Alpha Agent goes, the aliens move according to a card-driven AI, then the second agent takes her turn, then the aliens move again, and so on. Mission 1 featured nothing more in the way of terrain other than a lot of desert, so it was easy to move around but still needed a lot of planning. The aliens' AI rules are simple but well-conceived, with close-attack aliens that rush to engage Agents and long-range aliens that can fire from long distance. Since aliens act after each Agent turn, sometimes a badly positioned agent suffers from multiple alien attacks in a round. Aliens are intelligent creatures and usually move to kill wounded agents. If you are playing Agent Titanimu (a.k.a. Hulk), you can resist in the middle of the battle but nothing is worse than moving Thorium (Bio-tech) or Mercury (infiltrator) in close combat.

Finally comes the event phase in which a lot can happen. The event deck is built according to the mission set-up, so what will happen is thematically related to the mission. More importantly, you know what's in the deck, but you're not sure what will happen when and the same mission can have vastly different outcomes depending on when events occur. In addition, some events trigger effects listed in the mission rules. In mission 1, sometime during the mission a Xeno-alpha alien will appear. You know that you'll have to deal with this when it appears, but you never know when it will appear to confront you!

Other events change weather conditions, with the conditions remaining in effect until a new weather card is drawn. Other events have effects that are balanced according to the number of agents and aliens in play. Nothing will ever be too easy! 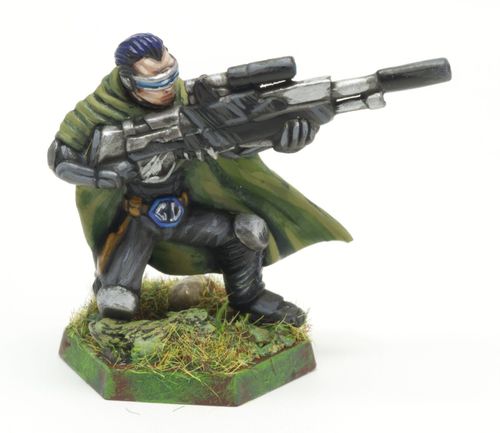 Hand-painted sniper agent
The real core of Galaxy Defenders are the agents: their powers, their weapons, and the way they level up during the game. In more detail, your agent is depicted on a hex-shaped board that grows during the game, with you attaching new hexes to that agent's board to provide new abilities and devices, tactics and replacement weapons. The agents differ a lot and learning how to best utilize their peculiarities is the key to victory. In the games I've played to date, Agent Thorium - BioTech seems essential for the group as he's the only agent capable of healing – and he has to start with the Drone device that can help the group with extra firepower. As the designer told me, "What's a fantasy character party without a cleric?"

Knowing how to equip your agents at the start of the mission is also crucial, and items like flash grenades and med-kits look like interesting choices.

The game's combat system is reminiscent of Doom, being a good oiled system with the right amount of randomness. You roll green (or blue) dice and get hit (strike) results and sometimes special lighting bolt results that trigger a weapon's special effects. Weapons, by the way, differ in range, attack dice, and abilities, with some weapons being able to hit more than one Alien at the same time.

The defender then rolls a blue die for each strike result, canceling a hit for each shield result and triggering armor special effects with bolt results. The dice also include icons for jam, ammo outages, and critical failure – this last one being an alien face. 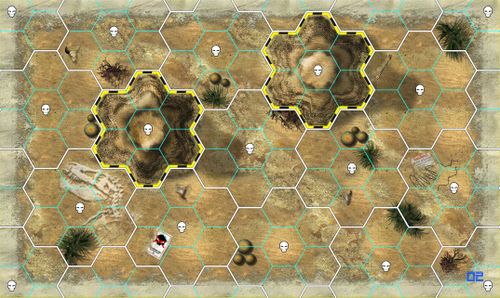 How range is calculated is great and simple. The hex-based maps are divided into hex-shaped areas, with each area being comprised of a hex and the six surrounding hexes. Ranges and alien movements are area-based, making them easy to see and compute with only minimal management. As a result, the game is fluid, quick and tense, and your attention is focused on how best to use your agent's abilities and how to cooperate with the other agents in the team. Who moves first? Where should you go? Which aliens will be able to attack me? Which ones should we attack first?

I'm not normally a fan of purely collaborative games, but as with Robinson Crouse you have a lot to discuss with one another while trying to solve problems and that leads to great interaction. Will the game survive over time? Who knows? I have played Mission 1 three times with different agents and a differing number of players, and every time a different game has developed. That's a good start.