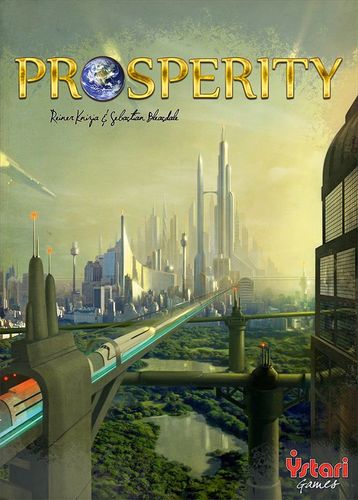 • French publisher Ystari Games already has buzz building around William Attia's Spyrium, this design being Attia's most involved since he blew open the door with Caylus in 2005 – but that game is due out in September 2013, with advance copies showing up at Gen Con in August. What does Ystari have planned for Spiel 2013 in October?

The answer to that is Prosperity from designers Reiner Knizia and Sebastien Bleasdale. I have no images to share of the tiles and game boards, but the following description should provide you with enough detail to imagine what's going on:

Quote:
Prosperity has players building up their countries on a grand but abstract scale, with them needing to balance concerns over energy and ecology with the constant need for capital and the long-term goal of prosperity points.

The game starts with 24 tiles available, half on the energy side of the shared game board and half on the ecology side. Two tiles on each side are placed on levels 1-6, with the players each having two research markers – energy and ecology – that start at level 1. Each player has an individual game board with color-coded spaces for tiles, a pollution track, and tracks for energy and ecology. A stack of 36 tiles – with tiles arranged by decades: the six from 2030 on the bottom, then the five from 2020, and so on to the five from 1970 – is set up during the playing area.

On a turn, a player draws the top tile from the stack, then everyone resolves the symbol highlighted on the tile:

Once everyone has done this, the active player takes two actions, repeating an action if desired. The possible actions are:

Players have limited space for tiles on their individual boards, especially since the tiles and spaces are color-coded, but players can cover existing tiles, if desired, losing any benefits (or penalties) in the process. Some parts of the individual board are off-limits to new infrastructure until you first provide transport; toll roads, highways and even train systems have drawbacks of their own, but ideally you'll be able to build your way past those trouble spots without causing too much pollution.

When the final tile is drawn, that player finishes his turn, then everyone scores: twice for their energy and ecology levels, one for capital (with money being converted into prosperity points), once for research on both tracks (with points for those researching the most), and once for prosperity. Whoever tallies the most prosperity points wins! 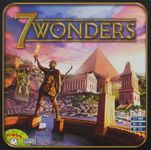 • In a newsletter announcing its plans for Gen Con 2013, which takes place in August, the U.S. division of Asmodee mentions that its special guests will be Christophe Boelinger (designer of Dungeon Twister: The Card Game, which debuts at Gen Con), Bruno Cathala (who was a developer on Hurrican's Augustus, which has its full launch at Gen Con), Pierre-Yves Franzetti (owner of Helvetia Games, which will have its line distributed by Asmodee in the U.S.), and Antoine Bauza, who just picked up the 2913 Spiel des Jahres award for Hanabi to go with his 2011 Kennerspiel des Jahres award for 7 Wonders. Rampage, which Bauza co-designed with Ludovic Maublanc, will be playable on a giant-sized board at Gen Con ahead of the game's release at Spiel 2013 – but what caught my eye in the newsletter was this line: "Antoine Bauza - author of 7 Wonders, Takenoko and his newest creations: Rampage and the upcoming release of 7 Wonders: Babel".

Yes, that's another expansion for 7 Wonders – not that the announcement should be a surprise to anyone as expansion plans have been floating about since the game's debut in 2010. As for Babel, in July 2011 French game magazine Jeux sur un Plateau presented an outline of seven expansions – a rough outline clearly since Cities was not on that list. In that article Babel is described as follows: "As in the Biblical episode, players will work together to build a common wonder and provide knowledge that's accessible to all".

• The U.S. division of Asmodee has announced a fifth title in Frédéric Henry's Timeline series of games – Timeline: Music & Cinema – with that title due out before the end of 2013.

• In Q4 2013, Italian publisher Giochi Uniti plans to release a new game from War of the Ring co-designers Marco Maggi and Francesco Nepitello titled Venetia. (How did I miss this game previously when it's been in the BGG database so long? I suspect that's due to it being admitted while Spiel 2012 was underway. I miss a lot during that time.) In any case, here's an overview of the game, which encourages gamers to struggle against one another yet again in Venice:

Quote:
In Venetia, players compete to become the most prosperous and influential noble family in the history of the Serenissima Republic. From its rise in the ninth century to its decline and fall in the eighteenth, players take part in the golden age that built the city that once was the Queen of the Mediterranean.

Each player controls a patrician household, vying for power against other influential families. To gain clout and fortune (i.e., victory points), families extend their Influence outside the city, sending representatives to foreign markets. As their authority spreads, the power of Venice increases accordingly, and distant towns and ports fall under the sway of the Serenissima. In the meantime, players compete inside the city for the coveted title of Doge, the head of the government, spending resources and Ducati (money) to gain popularity.

But the hegemony of Venice over the Mediterranean is threatened by many enemies. The Republic faces the rise of competing powers, such as the rival seafaring Republic of Genoa and the kingdom of Aragon to the west, or the Eastern Roman Empire and then the Turks to the east. Century after century, players will take part in the struggle that will see the rise and fall of the Republic of Venice.

Venetia is played across three epochs: Rise, Apogee and Struggle. A Power track on the board is used to record the passage of time. Venice starts the game in its Rise, and the game ends when the Struggle epoch is completed. Players score VPs at the end of every epoch, and the player with the highest score at the end of the game wins!