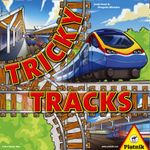 • What's this, you might say? Information on a new title from Austrian publisher Piatnik? Yes, indeed, your eyes aren't deceiving you, but in this case I heard directly from designers Jordi Gené and Gregorio Morales about the 2014 release of Tricky Tracks, circumventing Piatnik's efforts to keep me from ever learning anything about its new releases. (Okay, I might not be on an Austrian blacklist of some sort, but I'll be darned if I ever get a response from Piatnik to my requests for information.) In any case, here's a summary of the gameplay in this game:

Quote:
Each player in Tricky Tracks starts with nine square tiles, with each card showing some combination of railway tracks and possibly one or more colored stations. The game board features a 2x2 grid onto which players can place tiles, with tracks leading into these tiles and pairs of four colored stations (red, green, blue and yellow) surrounding this playing area.

On a turn, a player places one of her tiles onto one of the four locations in the grid, then scores for each pair of same-colored stations that she connects. Once everyone has placed all of their tiles, the player with the most points in her lowest-scoring color wins! 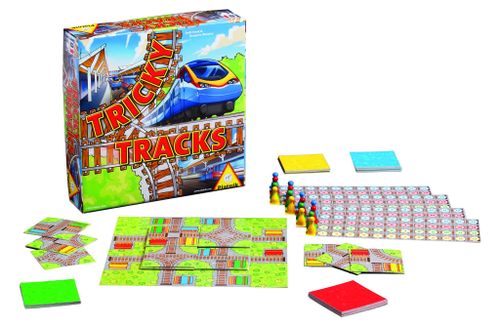 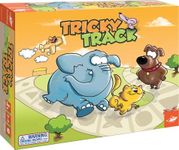 • By chance, Canadian publisher FoxMind released the similarly-titled Tricky Track by designer Ayala Geron in late 2013, although this title is aimed at a younger audience:

Quote:
In Tricky Track, elephants and cats compete to reach the end of a track of shapes — but they need to be wary of traps as dogs will push the cats back while mice will scare the elephants.

The first player to advance both his elephant and his cat to their respective ends of the track wins! 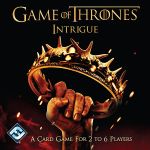 • U.S. publisher Fantasy Flight Games spun its A Game of Thrones Living Card Game series into Game of Thrones: The Card Game in late 2012 to take advantage of the popularity of the HBO adaptation of the George R.R. Martin book series, and in March 2014 it will release a second title featuring photographs of characters from the TV series. Here's an overview of Game of Thrones: Intrigue from designer Reiner Knizia:

Quote:
The subterfuge of King's Landing comes to life in Game of Thrones: Intrigue, a fast-paced card game for two to six players. Manipulate the positions of iconic characters from HBO's Game of Thrones TV series as you attempt to establish your Great House before being eliminated. Whoever can outwit their opponents while managing to keep their own House alive shall be recognized as a master of intrigue. Make your plans, then claim the Iron Throne!
Hmm, not much to go on in that description, but I'll take a wild guess at this being a modified version of Great Wall of China, a Knizia title that FFG released in 2006.

• Fantasy Flight Games has also listed the new version of Phil Hall's WWI dogfighting game Blue Max in its March 2014 solicitations, so this title from Stratelibri should be available in the U.S. — and elsewhere in the world — at about that time. 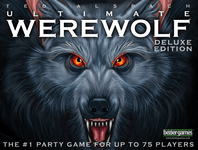 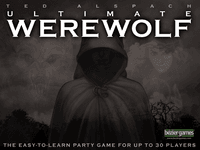 • Ted Alspach from Bézier Games lurvs Werewolf. I mean, really, really lurvs it to an almost disturbing level, so much so that he created Ultimate Werewolf: Whitebox Edition in 2007 to present his own take on the game, only to supersede that publication with Ultimate Werewolf: Ultimate Edition in 2008. Where do you go from there? What's better than "ultimate"?

Alspach has attempted to answer that question with the announcement of Ultimate Werewolf: Deluxe Edition, a new version of the game due out in Q2 2014 that allows for up to 75 players to tear each other apart in a single game. Should you not need to accommodate that many people in one setting — and honestly how many people could? — Alspach also plans to publish Ultimate Werewolf, a version of the game that allows for up to thirty people, at the same time. Both versions of the game have new artwork, rewritten rules, and guides for the moderator to keep track of the many player roles.

Alspach plans to launch a Kickstarter campaign in January 2014 to fund these new editions, in addition to offering ArtPacks that feature alternative artwork for the game's most common roles. Says Alspach, "There are ten different ArtPacks to choose from, with a wide range of artistic styles from some of the world's best artists. Some ArtPacks are from well known boardgame artists including Klemens Franz (Agricola, Suburbia) and George Patsouras (Agents of SMERSH, Flash Point: Fire Rescue). There's even an ArtPack from BGG's InkyGirl, Debbie Ridpath Ohi, the world-famous children's book illustrator (I'm Bored, NAKED)." World's best artists? I think you're overstating things a bit, Ted, but I know you're proud of their work.

This expansion for Ultimate Werewolf has six new roles for your werewolfing fun. Think werewolves are too meek? That's because your villages have never had The Big Bad Wolf, who leads the werewolves to eliminate villagers twice as fast while he's in the game. On the opposite end of the spectrum is the terrifyingly-confused Fruit Brute, who is, of all things, a vegetarian. Elizabeth Taylor was pretty scary as Martha the crazy socialite, but every game you'll want to know who in your group is actually afraid of Virginia Woolf. And there's three more famous wolves, including one that totally coincidentally shares a name with one of the X-Men.

Ultimate Werewolf: Wolfpack is compatible with Ultimate Werewolf in all of its many incarnations.
I hope Ted's talking about Wolferine (sic), although perhaps Wolfsbane has grown more respectable since her New Mutants day and deserves special commemoration in such a project. Alspach notes that "for a limited time, Ultimate Werewolf: Deluxe Edition includes the new Wolfpack expansion (and maybe others), too!"