Here's another pair of titles on display at the Asmodee Play Mania press event during Gen Con 2014, with both them due out in time for Spiel 2014 in October. Since fifteen or so games were being shown at this event by publisher representatives, I didn't get a chance to play anything to completion other than Dominique Bodin's Witness, a four-player-only design from Ystari Games with a ten-minute playing time. Here's a game write-up based on that one play and other information from Asmodee:

Quote:
Witness is set in the world of Blake and Mortimer, a Belgian comic series started in the 1940s by writer/artist Edgar P. Jacobs. In the game, which is playable strictly by four players, you each represent one of four characters and your goal is to solve mysteries or crimes by sharing information with one another — but you are quite restricted in how you can share information!

Witness includes one hundred cases for you to solve, and each case starts with an explanatory scene or image or both that someone reads or shows to the group. Each player then looks in his personal casebook to find information available only to his character. Players randomly decide who shares information first and in which direction, e.g., player A might whisper information to player B while player C talks to player D. Next, B will share both his information and A's information to C while D talks to A.

After two more rounds of the most inefficient crime-solving system ever created, players read the conclusion of the case, which might offer additional information or another visual, then they each individually answer three questions about the case, with the group scoring one point for each correct answer for a final score ranging from 0 to 12.
Here was the initial information presented to us for case 3, one of three cases available at the event: 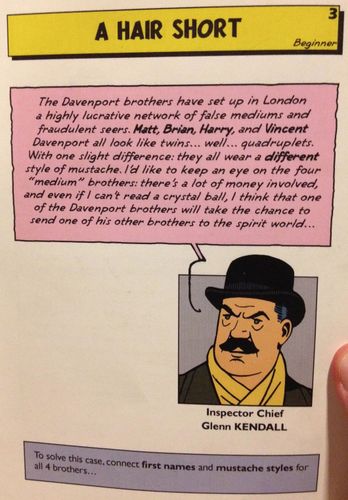 The four of us then peeked at our case studies, and I discovered the style of mustache worn by one of the four brothers. Based on the information-sharing card we revealed, I first heard about a different brother's mustache from the player on my left, then shared this evidence (possibly correctly) along with my own to the player on my right, then heard a story that surprised me with its length (even though it was probably only a few sentences long), then I shared that story even less possibly correctly to the right.

It's a good thing that police departments don't conduct investigations in this manner as we managed to score only four points for the case, three of those coming from the game explainer who quite possibly already knew the answers from a prior demonstration. And this was a beginner level case — hoo boy! I suppose that as with any game, if you play it repeatedly, you learn how to do it better, and I can imagine groups getting together again and again Risk Legacy-style to work their way through the cases and becoming familiar with the clue-giving patterns of their fellow investigators.

In any case, something quite different from Ystari — although given previous releases such as Mousquetaires du Roy (2010) and Sherlock Holmes Consulting Detective (2012), perhaps it's not so different after all. 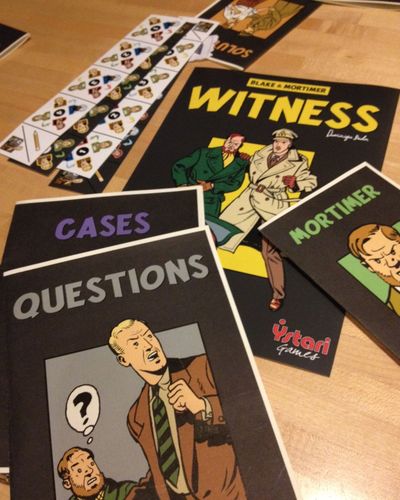 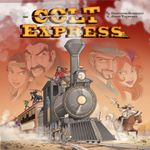 • Another forthcoming game shown during Play Mania that I was able to play at Gen Con 2014 — albeit later during the show — was Colt Express from Christophe Raimbault and Ludonaute. I've now updated the game description on the BGG game page to provide more details of game play:

Quote:
On the 11th of July, 1899 at 10 a.m., the Union Pacific Express has left Folsom, New Mexico, with 47 passengers on board. After a few minutes, gunfire and hurrying footsteps on the roof can be heard. Heavily armed bandits have come to rob honest citizens of their wallets and jewels. Will they succeed in stealing the suitcase holding the Nice Valley Coal Company's weekly pay, despite it having been placed under the supervision of Marshal Samuel Ford? Will these bandits hinder one another more than the Marshal since only the richest one of them can come out on top?

In Colt Express, you play a bandit robbing a train at the same time as other bandits, and your goal is to become the richest outlaw of the Old West. The game consists of five rounds, and each round has two phases:

• Phase 1: Schemin' Each player plays 2-5 action cards on a common pile, with the cards being face up or face down depending on the type of the round. Instead of playing a card, a player can draw three cards from her deck.

• Phase 2: Stealin' The action cards are carried out in the order they were played, with a player's best laid plans possibly not panning out due to mistakes and oversights!

The game takes place in a 3D train in which the bandits can move from one car to another, run on the roof, punch the other bandits, shoot them, rob the passengers, or draw the Marshal out of position. The train has as many cars as the number of players, and each car is seeded with gems, bags of loot or suitcases at the start of play.

The train rolls out for a three-player game
Quote:
Each player starts a round with six cards in hand, with each card showing one of these actions. At the start of a round, a round card is revealed, showing how many cards will be played; whether they'll be played face up or face down, or individually or in pairs; and what action will occur at the end of the round (e.g., all bandits on top of the train move to the engine). You can pick up loot, gems or suitcases only by playing a "steal" card when you're in a train car that holds one of these items — but since everyone is planning to get these goods, you'll need to move, punch and shoot to get others out of your way. You can punch someone only in the same car as you, and when you do, the other bandit drops one of the goods he's collected and is knocked into an adjacent car.

Each player's character has a special power, such as starting the round with an extra card, playing your first card face down, or pocketing a bag of loot when you punch someone instead of letting it hit the ground.

You can shoot someone in an adjacent car or (if you're running on top of the train) anyone in sight, and when you do, you give that player one of your six bullet cards; that card gets shuffled in the opponent's deck, possibly giving her a dead card in hand on a future turn and forcing her to draw instead of playing something. If the Marshal ends up in the same car as you, likely due to other bandits luring him through the train, he'll be happy to give you a bullet, too.

At the end of the game, whoever fired the most bullets receives a $1,000 braggart bonus, and whoever bagged the richest haul wins! 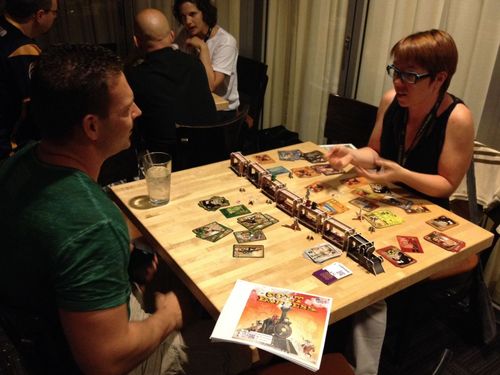 Our three-player game of Colt Express was great fun, with each round's card draw proving to be a nice surprise along the lines of trick-taking games in which you're challenged to make the most of what you've got. Yes, you can draw more cards instead of playing something — and late in the game you'll likely be forced to do so given all the bullets in hand — but you want to take action when you can, preferably sussing out what everyone else is doing when you enter a tunnel and can't see what they're planning to do.

Maneuvering your bandit inside the train can be a little tough for those with big fingers or clumsy hands, but you can just poke your guy out of the car, then move him where you need to go. The positives of the train outweigh the negatives, though, as you get to play out a mini-movie during the game, with you racing across the top of the train cars and hopping in and out of cars to steal, punch and shoot. Sure, the 3D train might be a gimmick, but it's one that enhances the spirit of gameplay and will undoubtedly get people to the table once they see it set up. 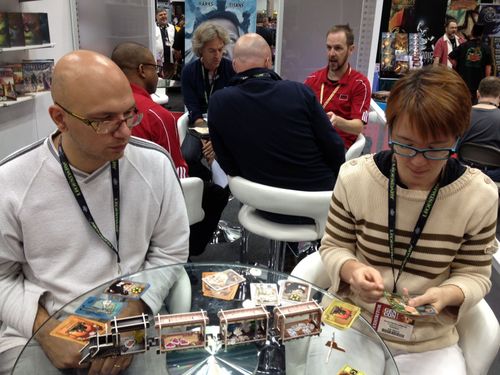