• French publisher Matagot had five games on display at Asmodee's Play Mania event during Gen Con 2014, one of which is still in the works for 2015 while the others are mostly intended for release in time for Spiel 2014 in October, but as always for Matagot (not to mention dozens of other publishers) lots of things need to done in order to get the games to the show in time.

The "family game with friendly plastic bits" role for Matagot's 2014 line-up appears to be Arnaud Urbon and Ludovic Vialla's Korrigans, for which I wrote a description in March 2014 following a demo at Spielwarenmesse 2014:

Quote:
Each player in Korrigans has two korrigans (a.k.a. fairies or spirits) and must use them to move about the landscape, claim animal tokens in order to access other parts of the land, and eventually find the pot of gold that will become visible once the rainbow's location is revealed.

In more detail, players take their first two turns to place their korrigans on the game board; with each korrigan you place, you look at the tokens in that location and keep one of them. These tokens show either gold (which possibly gives you points at the end of the game) or an animal (which allows you to pass through gates that bear that animal to reach a different landscape). From the third turn on, players use their animal tokens to move their korrigans and pick up more tokens. The final player in each round draws a rainbow token from a bag and places it in one of the rows or columns on the board; this means that the pot of gold won't appear in this row or column in the final part of the game. 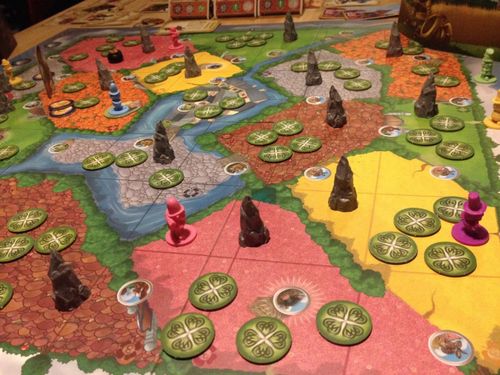 Final artwork, I think, with plastic menhirs and korrigans
And should you care to see some of the gameplay in action, here's a demo video we recorded at Spielwarenmesse 2014:

• Matagot doesn't have a cover image yet for François Rouzé's Room 25: Season 2, so I'm going with the base game's cover instead. Here's an overview of what you'll find in this expansion:

Quote:
The famous TV show "Room 25" is back for a new season with two characters joining the cast: the adventurer and the psychopath.

In Room 25: Season 2, all characters have their own special ability. Also, thanks to an adrenaline surge, the participants can perform one additional action in a turn of their choice. Of course we've made the complex different — and more difficult — by adding new rooms...will you be up to the challenge?
So new characters, new powers for each character, and new rooms, such as a time room that takes time off the clock whenever you enter it. Why would you ever enter it then? Well, just suppose the alternative routes were far, far worse... 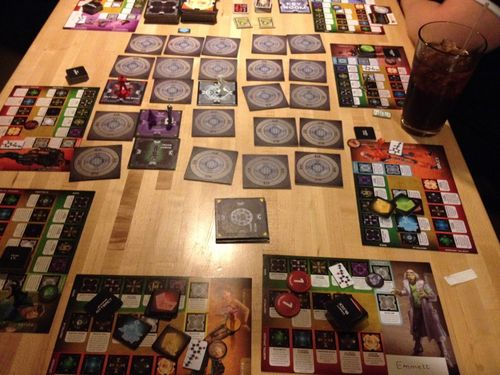 • Matagot first released Sun Tzu, a new version of Alan Newman's Dynasties, in 2010 and for 2014 it's jazzing up the release with miniatures for both players and 3D scoring stands that rotate to highlight the scoring taking place in the upcoming round. The gameplay remains the same, and it goes a little like this:

Quote:
In 506, Sun Tzu marched up the Hwai River where he was assaulted by Ch'u armies under the command of King Shao. Sun Tzu and his Wu soldiers were outnumbered and King Shao's armies held the high ground. Sun Tzu feigned retreat and tricked King Shao into spreading out his forces, ready to pursue. With the Ch'u scattered, Sun Tzu crushed their forces in piecemeal fashion at the battle of Bai Ju, routing the Ch'u back to their capital of Ying. King Shao fled Ying seeking refuge and asylum across the borders while Sun Tzu remained the master of strategy and tactics.

In Sun Tzu, players take on the role of Sun Tzu or King Shao, leading these two opposing armies in an attempt to unify China through the deployment of their armies and forces rather than by brute force. Each turn players play cards to specific provinces, then reveal them individually by province. Armies are added or removed from the province depending on who played the higher valued card or who played a special card. Some cards can only be used once, so playing the card at the correct time is critical to a winning strategy. The game has a feel of "tug-of-war" as the scoring marker starts in the middle of the scoring scale and the players attempt to move the marker to their side of the track. The game ends after nine rounds or if either player is able to move the scoring marker to the last space on his side of the scoring track. 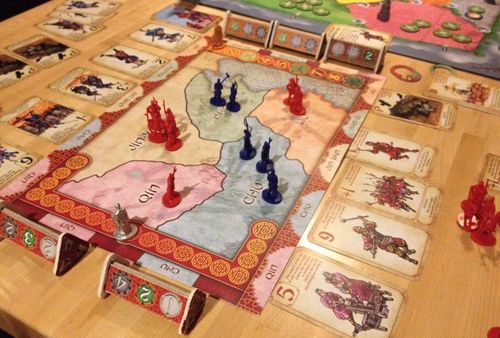 • Taking the role of "big box filled with plastic" is Christian Martinez's Inis, which I first saw at Spielwarenmesse 2014 under the name "Brenn" and which I didn't snap a picture of during the event since the table was always occupied. (Yes, at one point that table was occupied with me, and you think I would have snapped a picture then, but apparently I spaced out.) Here's a long description of the gameplay:

Quote:
Inis is a game deeply rooted in Celtic history and lore in which players win by being elected King of the Island (Inis). Players can try to achieve one of three different victory conditions:

Over the course of the game, players also earn deeds, typically chanted by bards or engraved by master crafters, that reduce by one the magic total of six for any condition. While one victory condition is enough to claim the title of King, a game of experienced players usually has a tight balance of power, emphasizing the leadership of the capital of the island.

At the start of each round, players draft a hand of four action cards (with 13 action cards for three players and 17 for four players) during the Assembly. Action cards not played at the end of one season are not held for the next. Players also have access to leader cards for the territories that allow it and where they were elected leader during the assembly. Each Assembly reallocates those cards. Finally, they collect "epic tales" cards that depict the deeds of the ancient Irish gods and heroes, like Cuchulainn, the Dagda, Lugh and many others. These will be kept and used to inspire the clans and achieve extraordinary feats...under the right circumstances. The cards provide a variety of actions: adding clans, moving clans, building/exploring, and special actions.

Careful drafting, hand management, bluffing (especially once players understand the importance of passing their turn), good timing, and a precise understanding of the balance of power are the keys to victory. In the shorter "Seasons" mode, if no player has won after four rounds, then the leader of the Capital is elected King during the fifth assembly of the clans, even if he fulfills no victory condition. In the longer "Epic" mode, you play until an undisputed king is elected during the Assembly.

While Inis has "dudes" that are "on a map", it's a beginner's mistake to play this as a battle game because eliminating other clans reduces your chances of scoring a Leadership victory condition. Peace among different clans, with or without a clear territory leader, is the usual outcome of a clan's movement. Battles will occur, of course, as the Celtic clans can be unruly and a good player will listen to his clan's people (i.e., his hand of cards). That battle aspect is reflected in the clan's miniatures representing warriors. Woodsmen, shepherds and traders complete the set of twelve minis for each player; these occupations have no impact on the game, but give it flavor.
And the demo video from Spielwarenmesse 2014, which was shot on possibly the worst table-covering ever for a miniatures game without a board. Perhaps for 2015 I'll have to wear a tablecloth as a cape so that I have it handy for such occasions:


• The final title shown by Matagot isn't due out until 2015, and it began as something of a lark, a daydreamy gamestorming session in which the principals at the company asked themselves what would be likely to climb the ranks of BGG hotness. One suggestion: Zombies vs. Cheerleaders. Then they started looking around the web and discovered a comic series with that very title published by Moonstone, so they licensed the book and are now working on a two-player tower defense game. 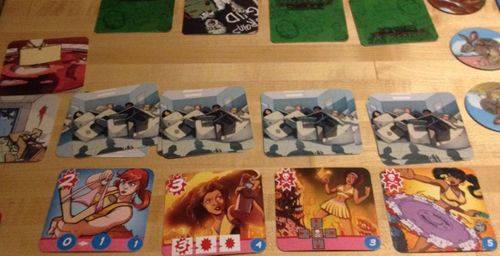 As you can see above, the cheerleaders are a spunky group of gals who use whatever's around them — hairspray that you can use as a flamethrower, a frisbee covered with razor blades, a thongshot — to stand up against the zombie horde. The number in the upper-left shows their attack value, with some of them serving instakills.

The zombies attack in massive stupid waves, as you might expect, but before they can reach the cheerleaders, they need to demolish the barricades that protect the pompom girls. Many of the zombies have special abilities, and they initially swarm face-down so that the cheerleaders have to rush around and figure out who to strike first. 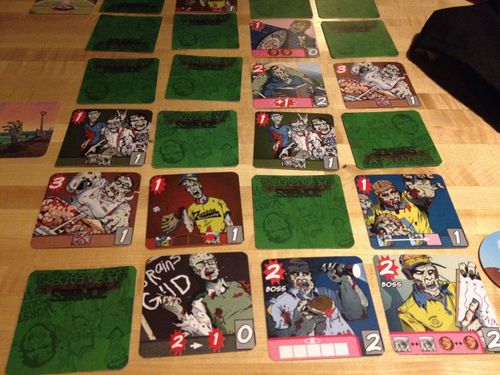 On a side note: My wife and some writer friends used to hold brainstorming sessions during which they'd try to generate magazine article ideas by throwing out random words, doing dictionary searches, grabbing lines from newspapers, etc. One idea emerged along the same lines as Matagot's, that is, by seeing what the magazines frequently feature on their covers, then trying to mash those words or topics into new, sellable combinations. The result for Redbook? "The Better-Orgasm Diet".