Opinions, not always positive, on the gaming world.
Recommend

"She said the same thing about waffles."
Patron Badge for 2007 through 2014, 2017 through 2020
Retrospective 5: Duel Of Ages
How Obtained: In gratitude for working on BoardGameGuru's website

Quote:
So my plan from here is to talk about virtually every game I've ever owned. I'm not going to slap the word "review" on those posts, because it'll be a completely subjective recollection of my experiences with each game, rather than a judgement on its merits or qualities from anything other than a personal history perspective. Are you reading this quote for the first time? If not, do you think I should stop including it? 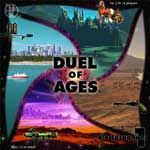 If you don't you need to run away from the first edition of Duel of Ages. That's what you'll be doing all game.

Man I've had some epic sessions of this - including one tight as hell game that was tied at bedtime and had to continue the next morning for another hour (ok, it didn't HAVE to, but we were having fun) as well as a game at LobsterCon in which a hugely powerful Spartacus killed off character after character of mine until meeting his match in the unlikely form of a character called Brad The Slacker...

In summary it's a light war game with strange time travelling mission elements.

Instead of this skirmish just being about killing members of the other team - for which you only gain one point (for ending with more members alive than your opponent), in fact you'll be getting most of your points from how you perform in the grandly titled "adventure keys".

These are mini boards acting as the scoring zones - featuring either set targets to complete on each space, or producing a changing target from cards, which will then have variable results based on how by much you beat or miss the target.

Spoiler (click to reveal)
Though you can win by wiping the opposition out of course this is much easier said than done when the characters are somewhat balanced (a draft helps here) and a powerful weapon is discarded after a single kill.

So, it's important to note that there are differences in how challenges are resolved between the first and second versions of this when taking into account my thoughts - I've only played the original with all its flawed production elements of bendy boards and tiny counters.

I particularly 'enjoy' the unlisted set up section where we hunt for the right tokens for our characters after drafting them - many of which are quite similar. A good five minute task after I collected all the expansions!

In the first version you roll dice for resolving absolutely everything and the really thematic stuff has to happen in your head. If you're the sort of person who likes to read a lot of flavour text and really get the theme handed to you, you're not going to find this much more than a dice fest. If you're a fan of tightly balanced Euro type games exclusively this is going to irritate you a lot.

To give a feeling of what a game is like, I guess I can insert a game report here... 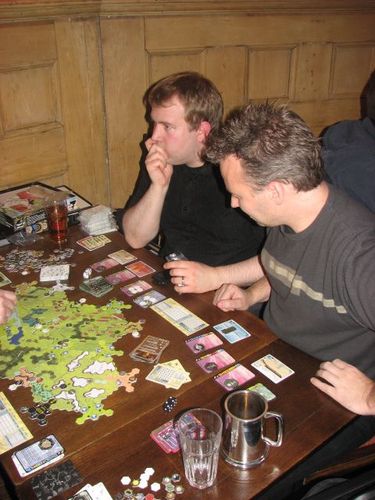 This picture is by user "Ravenhoe" but more importantly features me (I'm the one who hasn't done his hair and EVEN more rarely shows me without a beard which only happens very, VERY occasionally)

Adventure Keys: Lith Alliance, Bases, Royal Tournament, LabyrinthsA difficult and hard to traverse map set up with a banishment zone south of the Congo, meaning the banished were out of the adventure areas for a long time.

The only easy route out was quickly covered by team white with the Stingwhip Sentinel (one of the in game static artillery units - in this case a particularly violent hedge), which led a charmed life and survived the whole game.

First Blood went to team black as, following an initial injury to Sir Gawain from Gana (a shapeshifter), who had shifted into his form, and from Frostdancer, he was shot to death by Sgt. York (WW2 soldier) a little later, who was packing the Seeker rifle.

Immediate retribution came for Team White from Mildred Stonegutter (the 1950s sexist battleaxe type), who took exception to Frostdancer attempting to walk away from her - braining him with her rolling pin.

Meanwhile The Bladed Terror (some sort of horrific beast from the future) was performing sterling work for team white, having won the skirmish at the royal tournament (presumably the entrance qualification criteria were reasonably full of loopholes), this creature of mass destruction then destroyed the enemy HQ, and then, with a little help from the Quarterback (yes, a quarterback), killed both Minx and Jinx, who were approaching white's base with a view to destroying the HQ and getting back on level terms.

In the late game, much of the board was being covered by York, who had grabbed the Sniper Rifle from his team's vault and took up a covering position over the royal tournament and both the ancient and colonial labyrinths.

During his time as vicious sentinel of the yazoo, however, he took out Raygun Roger (basically Flash Gordon) - not on his first two attempts when Roger was flying high on his jetpack and thus an easy target, but upon York's third attempt, firing through thick swamp. Showing off, much?

In response, Sgt Gritt (a different WW2 solder to Sgt York) risked his own neck to send the grizzly bear and cub after York (pets are a little bit like artillery, but they move), thought they never got close as York decided his time was better spent trying to get his team back to level scores in the labyrinths.

Sgt Gritt had already killed Brad The Slacker from long range using a scoped Model 1903, and repeated the trick on Camden Drake late on.
(I think there was a cheat here - pretty sure we failed to enforce the rule where you have discard a weapon that has killed someone)

Team white (me) was in the lead for most of the game, at one point leading 5-1, having taken an unassailable advantage in the lith alliance and destroyed Black HQ as well as doing serious damage to the opposition ranks.

Team Black (my brother) came roaring back late on with assaults on the Royal Tournament and the colonial labyrinth - only being thwarted in their attempts for a draw by three successive squeaks on the bar-room brawl challenge, eventually running out of time.

Thanks to sterling work from Mick The Lion, Team Black won the Modern Labyrinth easily.

Team Black also took a late control of the royal tournament, thanks to the cover from York's sniper rifle.

They also controlled the ancient labyrinth, which had been entirely ignored by Team White.

Unfortunately they had lost 4 of their members; Frostdancer, Minx and Jinx, Brad The Slacker and Camden Drake all never left the field of battle.

Team white on the other hand only lost two members - Sir Gawain and Raygun Roger.

The white team also controlled the future labyrinth thanks to Roger and Reaver.

Along with the destruction of the Black HQ and the lead in the Lith Alliance, Team White therefore scored 4 points.

The Colonial Labyrinth was tied.

An excellent fun game this time, that swung back and forth, despite a very difficult map set up to traverse. 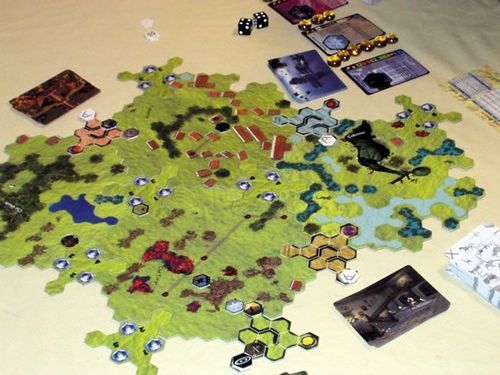 This image by user "tiredmind"

How do I feel about this game these days? Well, I've put it on the trade list so you would think I've gone off it, but actually it remains one of the more fun experiences I can have - I just wonder how much play I'm going to get out of it since it has

a. Unfashionable central mechanisms
b. Been replaced by a newer edition

I may play it once every two years - I'm trying to decide if that much play is worth it if I ever get an offer - I suspect given its general poor components vs high value of a complete out of print game means such offers will be few and far between and I can avoid having to make the decision at all, which would be pretty cool all told.

In any case, I reckon I need to play this again soon to give me a good idea how much I like it these days - mainly to see if I can play a fun game in 90 minutes rather than the 8 a side epics I've played in the past.

In any case, I like rolling dice - but I wonder if Summoner Wars has got the drop on this one for its (MUCH) quicker set up and easier accessibility for more casual gamers. However, it is even more abstracted and you lose that awesome time travel update where you can give Spartacus a baseball bat and launch a guided missile at Napoleon who is driving away as fast as he can on an ATV...

But once again writing about it has made me think how much I want to play it again, which has to be a good thing!

EDIT: I was interrupted by the return of my wife from work before I did my usual proof read, so have made some syntax corrections and tried to make the whole thing a bit more readable.