Opinions, not always positive, on the gaming world.
Recommend

When a hand shake is inadvisable

How obtained: All cash methinks, Villa Paletti was from France. 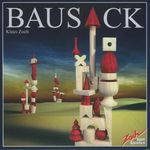 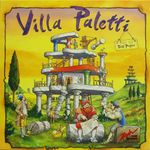 Ah the wonderul world of dexterity. Beloved of people who don't drink a lot of caffeine, hated by those of us who live on the stuff because we work shifts and anyone without the solid as a rock musculature of a fighter pilot.

Basically, what I'm trying to say is that I'm the sort of gamer who knocks over towers. A lot.

While todays youngsters are spoilt with Animal Upon Animal I think Jenga was probably the first competitive dexterity test I remember. Every time I play a game where the rules take two sentences...

Quote:
take a piece out and put it on the top. Don't knock the tower over or you lose.)


...I have a pang of longing that every game could start so quickly. Save us all from long rules explanations (VLAADA!)

In fact, the "one person loses" rather than "one person wins" approach is ideally suited to a more grown up pursuit - drinking games! So I do have a Jenga set now, but sadly this is NOT my legendary Jenga drinking game set, which I donated to the bar at the Roxy nightclub in Kolkata, India. I imagine they binned it the moment I left, since it probably stank of liquor and cigarette smoke.

The great thing about the Jenga drinking game (you knock it down, you do a shot) is that it parallels that Douglas Adams invention...

Hitchhiker's Guide To The Galaxy wrote:
...an old drinking game that Ford learned to play in the hyperspace ports that
served the madranite mining belts in the star system of Orion Beta.

The game was not unlike the Earth game called Indian Wrestling, and was played like this:

The bottle would then be refilled. The game would be played again. And again.

Once you started to lose you would probably keep losing, because one of the effects of Janx spirit is to depress telepsychic power.

As soon as a predetermined quantity had been consumed, the final loser would have to perform a forfeit, which was usually obscenely biological.

Ford Prefect usually played to lose
I'm not saying Tequila is very similar in effect to that old Janx spirit telepathically, but it does tend to have an effect on dexterity gaming performance somewhat similar to that fictional libation.

I've always had a soft spot for a game that only works because of unavoidable production issues i.e. if it was perfectly made and on a perfectly flat surface, the first move would be a real terror.

Anyway, Jenga is still some fun every now and again, but it got totally ripped to pieces by Bausack when I got to play that game. It's a little like No Thanks! but instead of cards and chips you're talking about building blocks and diamonds.

The big catch is, of course, that the pieces are not lovely regular blocks you can use to fill up a regular tower, but a horrid mixture of what appear to be door handles, model vases, an egg cup (even, horribly, an EGG) all of which you somehow have to use to build a stable structure.

All pieces after the first cannot touch the ground, so you have to be really, really careful you don't end up with a balancing nightmare too soon (rest assured you'll have a problem eventually) because the true joy of this game is the wild creations you'll end up with.

I've had amazing success with this one at non-game centric functions in the past and despite the odd frustrating moment it is usually a great fun time - particuarly if you can swing it so that the opposition run out of money first and cannot pay to avoid the pieces you pass to them. 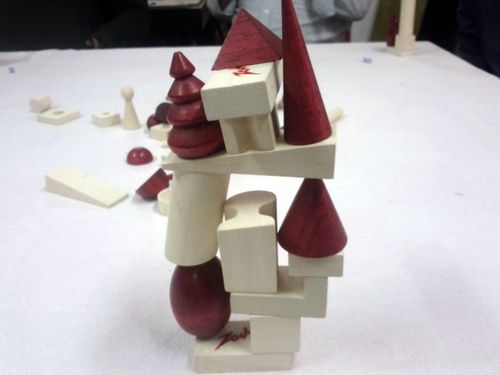 This image is by user "Firepigeon"

I'm not sure it's a truly great game in terms of the rules (I mean any of the various versions included in the book), but the use of all the crazy pieces and the way you have to adapt your building and try and to anticipate what you'll be stuck with later (the egg is still there, so maybe I should keep my egg cup uncovered...) is the real fun. I don't think which rules you choose to use matters, in the face of the fun that gives you.

In a fit of holiday feeling, I discovered a new copy of Villa Paletti sitting in the back of a toyshop in Chamonix, France (sitting in the valley next to Mont Blanc, Chamonix is one of my favourite places in the world) - now, for some reason I was certain that this game was either very rare or out of print - so I picked it up, only to find that neither of those assumptions was correct. It's a lot of fun, although that is despite the fact I'm not really sure there aren't a lot of issues with the ruleset. Just like in Bausack this doesn't really matter, though.

Where it all gets a bit vague for me is the turn when someone proposes that no more pillars can be removed from below - meaning a new level can be placed. This seemed a bit unfair in multiplayer games since if you're in the wrong place in turn order there's nothing you can do other than risk pulling an extra piece to stop that lucky individual gaining a huge advantage. This is because the person who places the new level will obviously do so in such a way as to free up his own pieces and endanger others. 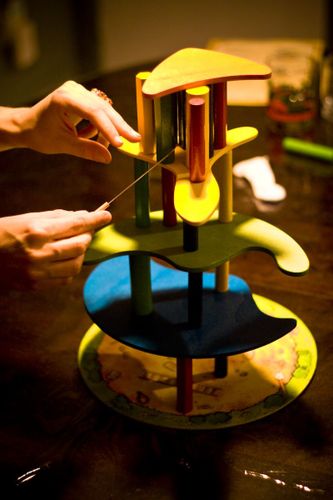 this gorgeous picture is by user "richardtempura"

As with the other dexterity games mentioned, the rules being a little strange doesn't really matter, since the tension is all in the lovely moments when you try and rescue a pillar that may be non-supporting, only to catch the higher level on its way out and become a supporting pillar inadvertently. The game comes with a nice metal hook to save you trying to reach into the middle of a forest of pillars with your hand.

I've only seen this game reach the top once and that game definitely did not involve me!

I think all of these are great fun and will continue to hold onto them. If I was getting rid of any of them it would probably be Villa Paletti, but on reflection the few sessions it gets per year are more than worth the house room.

I've played some others - Riff Raff and the like, but nothing has really beaten this little selection. I can certainly point you in the direction of Bausack (or, as I believe it is now known, Bandu) as a great, slightly more thoughtful alternative to another game of Jenga this Christmas.