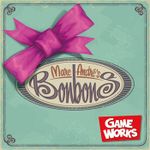 Marc André's Bonbons will debut at Spiel 2011 from Swiss publisher GameWorks SàRL and I thought I'd find out more about both the game and this first-time designer. (Many thanks to GameWorks' Sébastien Pauchon for translating my questions into French, then translating Marc's answers into English.)

To give some context for the interview, however, let's first describe the game:

Quote:
Bonbons is a memory game with a little twist. Eight types of candies, each in four colors, are hidden in the central 6x6 field, along with four special tiles: three money tiles and one empty package. All tiles in the center of the table are square.

The little twist is that on your turn you can rob candies from your opponents. If you turn over a square tile along with a matching round tile in an opponent's possession, you get to keep that face-up round tile and give the opponent one of your face-down round tiles in exchange. Sweet!

In addition, if you reveal the empty package, leave that tile face up and add another round tile to the ones you already have; now you must reveal five tiles instead of four. If you turn over a money tile at the start of your turn, then turn over the other two money tiles, you remove them from play and place them on one of your round tiles, which now counts as being face-up.

The first player to turn all of his round tiles face up wins. 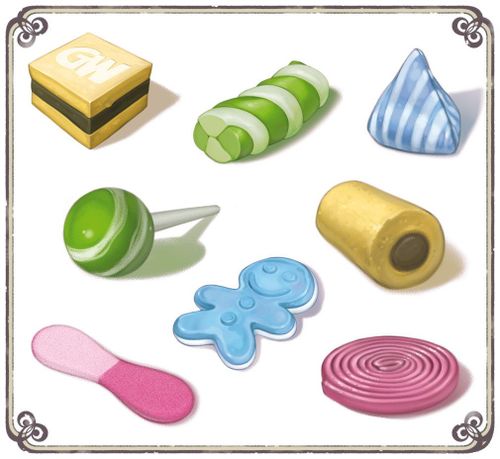 The candies in question
Daniel Jensen: First off, thanks for taking the time to do this interview. Can you tell me a little about yourself?

Marc André: I learned to play Chess when I was 4 and played competitively for eleven years, starting when I was 7. I like all types of games with a preference for smart and short games, streamlined of useless complexity.

DJ: How did you end up becoming a game designer?

MA: As with many others, I started by tweaking rules of existing games. Discovering a new game always puts me in a creative frenzy and pushes me to develop my own concepts.

DJ: To follow up, do you view yourself as a "game designer" or as someone who has designed a game?

MA: Many end up having only one game published. In my opinion, only those with several games on the market can consider themselves as real designers. Anyone might have one original game idea at some point in his or her life. The difficulty is achieving this repeatedly.

DJ: How would you describe the perfect game?

MA: That would be a game liked by everybody without the slightest complaint – but I don't think such a game exists.

DJ: How do you approach designing a game?

MA: When working on a game, I impose on myself a strict canvas, as if it were a contract game, e.g., a family game with only text-free cards or tiles. I designed several games within that canvas, among which what was to become Bonbons. 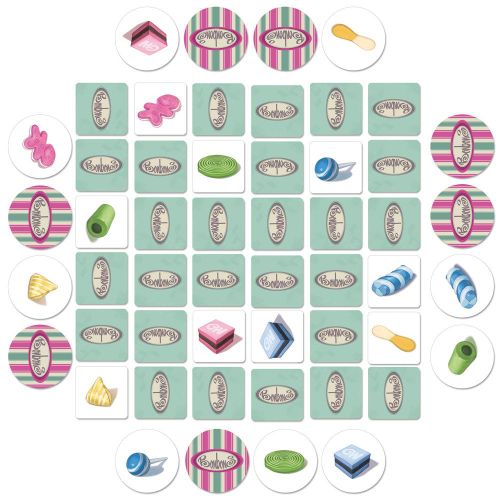 A game in progress
DJ: Is Bonbons the first game that you've designed, or only your first published game?

MA: It's my first published game. I'm taking part in the 30th designers' contest of the CNJ (Centre National du Jeu - National Game Center in Paris - the former Boulogne Billancourt contest). I sent four games in, one of which was the Bonbons prototype that I had to withdraw once GameWorks announced its intention to publish the game. But one of my other games is currently in the final round. I have designed other games since, and I still have many rough ideas to be polished for 2012.

DJ: How did Bonbons end up being published by GameWorks?

MA: I made contact and sent them the rules with pictures of a game in progress. Sébastien Pauchon later confessed that he was actually turning my proposition down with something like, "Sorry, we're not interested" when he suddenly thought "Why not a memory, after all?" He finally wrote me back after having made a prototype and tested it satisfactorily. I don't know how a publisher's brain works, but I think I've been very lucky on that one.

DJ: What is the most important thing you learned during this design that you will take with you going forward as a game designer?

MA: I learned to be patient, but I think you learn more from your failures than from your successes.

DJ: Thanks much for taking the time to answer my questions. Good luck on all your future endeavors!

MA: Thank you very much. I'd like to take the opportunity to thank the GameWorks team for turning Bonbons into such an elegant and refined game.