The nominees for the Spiel des Jahres — Germany's game of the year award — were announced on Monday, May 14, 2018, and an article by SdJ jury chair Tom Felber that accompanied that announcement has now been published in English, so I thought I'd highlight a few excerpts from it, leading into those excerpts with this lightly-edited comment from BGG user Michael Kravetz:

mkmagius01 wrote:
The only peculiarity I see of the nominees are Kennerspiel ones. When reading the rules for QofQ and Clever, I thought they seemed light compared to past Kennerspiel nominees. I didn't find them any more complex than Azul. On the other hand when people were predicting Heaven & Ale in the weeks prior I kept thinking it was too complex for a nomination. The bgg weight ratings somewhat agree with me. QofQ (which doesn't have many ratings) and Clever are currently the lowest weight games to be nominated by Kennerspiel and while H&A is within the range of past nominees is on the high end of the scale.

Maybe there weren't many good games between those 3?
Turns out that many games between those three might have taken themselves out of the running because they weren't produced at a level that the SdJ jury would want to highlight before the general public. In Felber's words:

Quote:
Unfortunately, we are increasingly under the impression that ever more very good games are being hastily put together at the last minute in order to meet release deadlines, without sufficient attention being paid to the comprehensibility and completeness of their rulebooks. We have never had to rule out so many in and of themselves very good games as this year, simply because their rulebooks did not meet the quality we expect. We jury members no longer wish to see ourselves in the role of beta-testers for rulebooks, which are only made adequate on the second printing run.
(On a separate topic, Felber says, "Several times we have amended the age and playing duration recommended by the publishers on our recommendation lists because they just didn't match our own experiences.")

Sabine Koppelberg from the Kinderspiel des Jahres jury, which chooses nominees for the children's game of the year echoed Felber's sentiments in an article of her own:

Quote:
What most annoyed us this year, however, was rulebooks which were full of mistakes, and which lacked any careful editorial revision. Especially with international publishers, sometimes misleading and incomplete translations led to helplessness and a shrugging of shoulders around the gaming table. Only adults experienced in playing games were able to play correctly purely by intuition. That's why certain extraordinary and stunning game concepts, and ones children really enjoyed, haven't made it onto our recommendation lists. That's an incredible shame, sometimes these shortcomings were evident even after the first play. We're wondering where this comes from. Are the publishers or the German distributors really under such high pressure that new releases have to be rushed out onto the market in such haste?
One thing that BGGers often forget is that they represent a tiny slice of the entire gaming market. Yes, the site is visited by millions of people each month, but the game industry as a whole is much larger than that. We are the outliers in that we spend our time writing about games, posting pictures of games, recording videos about games, and so on. Most people play games on a somewhat random basis, perhaps after finding a game in a gift shop or picking up something for a present, and they won't go online to find answers to rule questions and they don't have a catalog of game references in mind that they'll refer to when learning a new game. They need to have everything in front of them in the rules, and it has to make sense from the get-go. 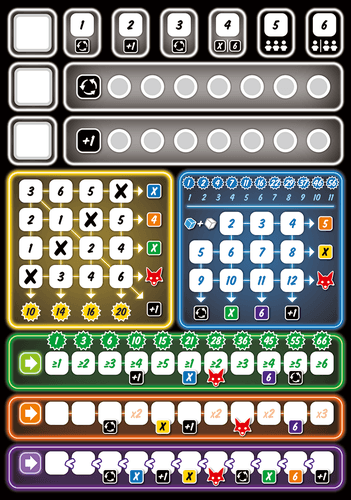 Ganz's score sheet — intuitive enough for everyone?
Multiple people have commented with surprise (or disgust) that Ganz schön clever, for which I posted an overview video yesterday, is extremely light for a Kennerspiel nominee, but I know that neither my game-playing mother nor my game-playing mother-in-law would be able to get through the rulebook on their own. I could show them the game, sure, but I don't come packaged in the box. Aside from that, I think that they would feel frustrated by the design itself, feeling stupid that they don't know what to do rather than challenged to see what they could do.

Perhaps you think my mothers are deficient in the field of games, but I would argue that most gamers are closer to them in spirit and experience than they are to BGGers. I end up talking about games with most people that I meet (since conversations often start with a "what do you do for a living" prompt), and a huge percentage of those people have heard about or played Catan but know almost no other modern games. They play other games — mainstream old-school games or party games or classic card games — but they don't have the vocabulary of a BGG regular, so references to, say, "worker placement" games would be meaningless to them, much less a debate over exactly what is and what isn't a worker placement game. They are gamers, yes, because they play games; they just have different tastes and experiences than you and me, and that's fine.

Quote:
Red [i.e., Spiel] marks games for everyone, especially people who have little experience with games. Even this group will have little difficulty getting to grips with these games. The charcoal-grey category [i.e., Kennerspiel] is for those players who have a little more experience in learning and applying tactical thinking to rules systems.
What's a medium-weight game for a BGG regular is not a medium-weight game for the gamer at large. I listen to music all the time in the background while I work, but I couldn't name the bands or the music sub-genres or talk about how so-and-so used such-and-such instrument in this unusual manner or how this song is a callback to an album from four years ago. I like music, but in no way am I knowledgable enough to have those types of conversations.

Other comments from Felber that seem worth highlighting:

• "What links the games in the red category is that they appear to be very simple but only reveal their true depth after several plays."

• "The lists were constructed based on the quality of the games and the experience of playing them – not on publishers or designers." His notes about the recommended games focus on the variety of experiences present in these titles:

Quote:
Santorini we recommend as a purely two-player game. With Facecards we've managed to get a small, relaxed party game onto the list. Woodlands appeals to a logical sense of spatial awareness. Memoarrr! requires a good memory, 5-Minute-Dungeon is co-operative teamwork under time pressure and Majesty is a classic improvement game. In the more challenging arena there is a deck-building game in the fantasy genre (Clank!) and a strategic Western adventure (Pioneers).
• "On a technical note, we considered games released onto the German-speaking market within the last two calendar years. Crucially, for international producers this isn't the first short run available in Germany but rather the point of a German-language edition from a secured publisher. A game may still be considered if it becomes out of print in the meantime due to great demand, as long as a new print run has been announced or is in production."

If German people can't buy a game at German retail outlets, then the game has 0% chance of being nominated!