Prepare Yourself for Paint, Pearls, Pets, Proving Grounds, and Puffy Dice in Early 2019 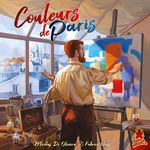 • French publisher Super Meeple, which to date has focused on new edition of older games, has given details of its first original release: Couleurs de Paris (Colors of Paris) from first-time designer Nicolas de Oliveira. Here's a teaser of the setting and gameplay, with this game due out in May/June 2019:

Quote:
You are a painter, and you've decided to participate in "Bateau Lavoir", a friendly competition between several painters in a workshop in Montmartre, Paris. The newspapers know about this challenge, so perhaps this is a good opportunity to become famous, following the path of Cézanne, Toulouse-Lautrec, Monet, or Renoir...

Couleurs de Paris is a management game in which you must take care of your paint tubes, mixtures, and time to create works, all the while anticipating others to perform as needed within a rotating set of actions.

• German publisher ABACUSSPIELE has a number of licensed titles for release in the first half of 2019 — Roberto Fraga's Crazy Eggz, a new Deckscape "escape room" card game — as well as the new card game Pearls from designers Christian Fiore and Knut Happel. Here's an overview of this game for 2-6 players:

Quote:
In Pearls, players dive for valuable pearls, then try to sell them at local markets. You either collect or score pearl cards of the same color (and value) on your turn. Cards with higher value score more points, but are less common. Pearls with lower value may seem weaker at first, but if you score a larger quantity of cards at once, you receive a necklace card with bonus points, if available. With a hand limit of ten cards, however, this requires clever hand management and timing.

At the end of the game, all pearl and necklace cards in your scoring piles score positive points and any cards left in your hand score minus points. The player with the highest total score wins.

• In April 2019, Renegade Game Studios will launch its "Solo Hero Series" with Kane Klenko's Proving Grounds, which includes both a novella by Monica Valentinelli to introduce its hero and the game itself, which takes place in a gladiatorial setting. This solitaire design consists of a training game as well as six mix-and-match modules that can be used individually or in any combination.

• Wooden cubes can represent many different things in games, and in Kibble Scuffle — due out in April 2019 from Keegan Acquaotta, Jennifer Graham-Macht, Scott Gratien, Jesse Haedrich, and WizKids — they become cat food, which makes perfect sense to me as my cats' food does indeed resemble cubic nuggets. As for gameplay:

Quote:
Kibble Scuffle is a tactical card game of area control to try to get the best food for your feline friends. With cards like the Robo-Vac and Laser Pointer, you can use toys to strategically distract your opponent's cats. Using the game box as a cat food box to store the food cubes, players take turns placing their cats and resolving their abilities. For example, the Pounce Cat removes a cat at a bowl. The Greedy Cat eats two food cubes. The Mangy Cat forces another cat to move away from their bowl. Once five cats are at any food bowl, the feeding (scoring) phase begins, followed by a new round.

Once a player reaches 20 points, the player with the most value of food cubes eaten at the end of the feeding phase wins.
• Smash City is a design from Stephen Avery and WizKids currently due out in March 2019 in which 2-4 players roll large foam dice in order to knock over buildings and spread poisonous gas throughout the city. Each of the four kaiju characters in the game include unique special powers. 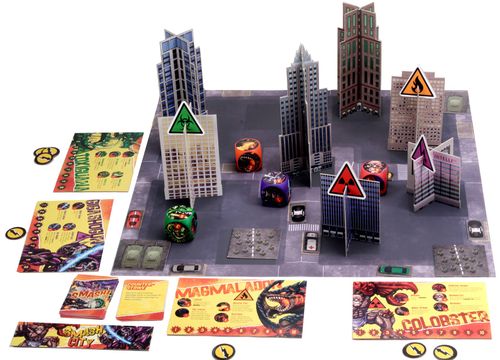