Everyone Needs A Shed

I am at Gridcon this weekend; Gridcon is the debut 'official' convention organised by Mr Gaming Rules! himself: Paul Grogan.

While he's been running his own 'home cons' for the longest of times already, the growing appetite from the community for long weekends of gaming (Handycon, Bastion and Airecon have only, relatively-recently, joined the ranks of hallowed calendar milestones Baycon and Midcon) have lured him out of his front room and in to a Hotel with conference rooms and everything! Thus, I find myself in the wilds of Devon in the delightful, 1000+ year old town of Tiverton.

Today, Friday, is the first official day though I wandered down the M5 motorway yesterday evening after work in Bristol: it seemed daft NOT to, given I was already half-way there. 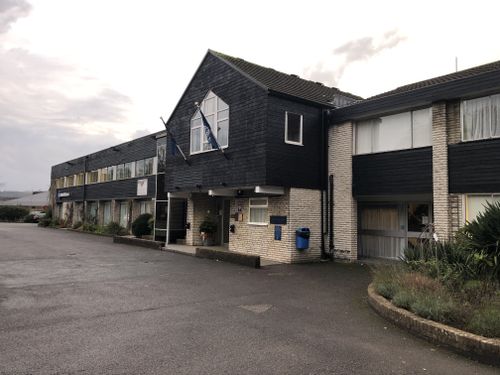 Just think of ALL of that gaming going on INSIDE!

The loose plan is that I've formally-scheduled four sessions of Attention All Shipping but also have Polygonia and Tickets Please! with me. The rest of the time - particularly in the beer-accompanied evenings - I'm hoping to get some Res Arcanas against new opponents, a Pax Pamir: Second Edition and a Throne of Allegoria too. A few pocket-sized treats filled the remaining gaps in the bags.

You may remember this post from a 18 months ago:

Quote:
So here it is: my first game design break...and rejection letter! 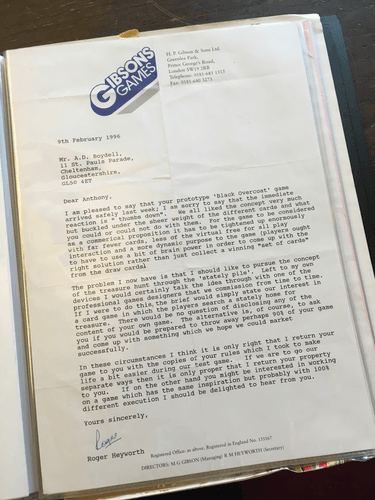 It wasn't all doom and gloom, though; I subsequently took Roger up on his offer and we spent the next 18 months working through several iterations of 'Haunted House', a much simplified version of The Black Overcoat Game. It (obviously) didn't end up going anywhere, but I did meet up with Roger on several occasions - including Baycon - and it was an experience that far from turned me away! Almost twenty years later and I was inducting Roger in to the UK Games Expo Hall of Fame for his (significant) contribution to the development of the hobby in the UK...and we're still playing the game even now! Maybe one day I'll rebuild it right and then I can take great pleasure in dedicating to his Memory?!
Well, in the last few days I have signed a contract for a game to be published by Gibsons. Yes, that's right: twenty four years after working with my first developer on my first proper prototype, the circle has been completed! It's an absolute honour to be working with a company that - through Roger's kindness and encouragement - kept me on the Designers' Path; Roger, I'm sure, would be very pleased indeed.

I'm not crying; you're crying!