Totally irregular blog about game design projects and any other relevant or irrelevant stuff!
Recommend

The Grand Trunk Journey is a pick up and deliver train game where players are operators of their own railway, trying to be as efficient as possible delivering goods to cities and ports using their cards consisting of rail equipment and locations. The game features Hand Management, Time Track, Point to Point Movement and Pick up and Deliver mechanics. 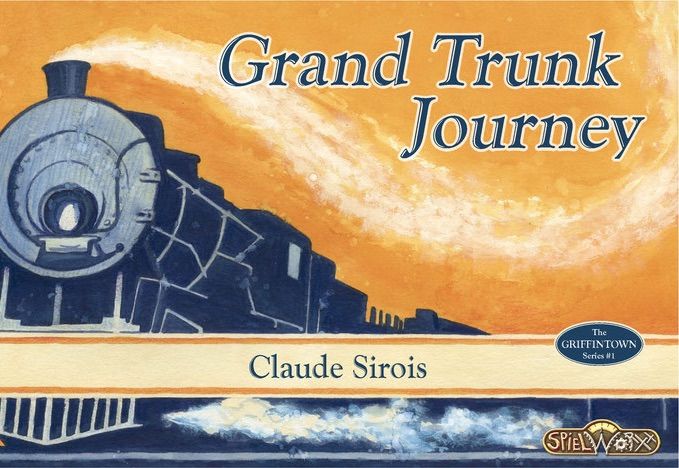 You want to know more about The Grand Trunk Journey that will be published by Spielworxx in March 2020?

Just stop a few minutes at the next 5 Terminals where I will present the main features of the game and a few design notes!

Excerpt from the Rulebook...

The Grand Trunk Railway was created in mid-19th century as a first goal to build a rail line between Montréal and Toronto. The company’s rail system expanded rapidly West, East and South by the merging of subsidiary companies such as the Québec & Richmond Railway, the St. Lawrence & Atlantic Railroad, and the Central Vermont Railway. The system was mainly serving the Canadian provinces of Québec and Ontario as well as the American states of Maine, New Hampshire, Vermont, Massachusetts and Connecticut.

You are the manager of a small subsidiary railway recently merged by the Grand Trunk Railway. You are also a visionary. Your ambition? To become the next CEO of the company and be in charge of its fate. But first, you must prove to the board that you have what it takes to operate such a big company by moving goods through the system as efficiently as possible and making the right investments. However, you are not the only one craving such a position. To be CEO, you must gather more victory points than your opponent managers by delivering goods, building new terminals and improving your subsidiary before time is up!

PRINCIPLE OF THE GAME

The Grand Trunk Journey features 12 eastern Canadian and US cities and 4 ports demanding and providing up to four types of goods: coal, iron, wood and steel. As managers of a Grand Trunk subsidiary, the players must use the cards they have in their personal decks, comprised of rail equipment (locomotives and railcars) and locations (cities and ports), to move their train between cities and ports and deliver the goods in demand. The movement of their trains is recorded on a Time track, which indicates how many days the players have spent. The more efficient the players are delivering goods over shorter distances, the more deliveries they can accomplish. 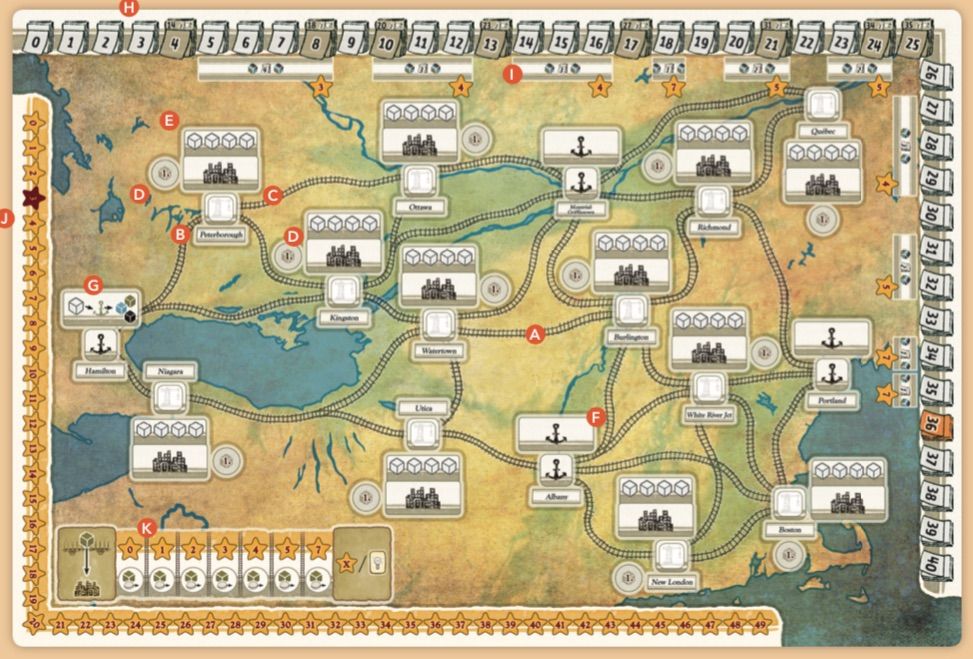 Image of the board (from the rulebook)

Player cards (from the rulebook)

When I began to develop the game, I had no story at all. The main mechanics were there but it was just a pick up and deliver train game. The first working titles were Another Train Game then, A Few Miles of Tracks, in reference to A Few Acres of Snow, which was an inspiration for the mechanic of train movement I will talk about in the next post. Before to submit the game to a first contest, I finally found my first story, which was set in the early 1970's in the US Midwest region, during the boom of the Steel industry. As a manager of a shortline railway, you wanted to take part in that boom in developing your company and delivering steel to ports for US consumptions and export as well as coal, oil and iron to US Midwest cities using the existing rail network of larger companies. At that point the name was named Routes of Steel '73.

The logos I developed for the game title during the design process.

The different company logos I used during the development (not real companies).

The game was brought back to the mid 19th Century in North East US and Canada in order to match my other game signed by Spielworxx called Griffintown (working title), which should be published in 2021 or 2022 (see below). So I had to develop a new map to include Griffintown (which is located in Montréal). I also removed some elements that didn't exist in the 19th century. We then changed the name for The Grand Trunk Journey!

Contrary to many other train games, you don't have to build tracks to develop your network. Your main task consists of operating your train on an existing network that can be used by all companies. The Storyline of the merging subsidiary companies (and their network) was perfect in that context. You will have to build new terminals to have access to the full network though. As you will see in a future post, all terminals built will be accessible to all companies.

For a matter of gameplay balance, I had to strech (and simplify!) the history of the Grand Trunk Railway. All companies in the game were not merged at the same moment. Here are some key dates :

1852 : The Grand Trunk Railway (GTR) was incorporated to build a line between Montréal and Toronto.

1853 : The GTR purchased the St. Lawrence and Atlantic Railway and the Atlantic and St. Lawrence Railroad (two parent companies) who owned the line between Montréal and Portland, ME. This gave the GTR an access to the ocean.

1853 : The GTR purchased the Québec and Richmond Railway and its line between Richmond and Point Levi, which is located on the south shore of the St. Lawrence River, just in front of Québec City.

1884 : The GTR gained control of the Central Vermont which served, among others, Burlington, White River Jct and New London.

The GTR also purchased and gained control of many other companies that were not included in the game, mainly because they were located in other areas such as western Ontario, Midwest and Western Canada.

To complete the network and give players additional options, I also included in the game lines controlled by other companies not related or merged with the GTR such as the New York Central Railway for the line between Niagara (Buffalo), Albany and Boston.

During the design of the game I tried different map configurations and different number of cities. It's hard to explain why, but the magic number seemed to be 12 cities, no more no less!

Why is this game part of a Griffintown Series? Well, Griffintown, which is located along the Lachine Canal in Montréal, was a very important industrial area during the 19th century and was served by the Grand Trunk Railway. My second game, called Griffintown (working title) focus on the industrial development of that area.

At the next Terminal I will explain how to operate your train in the game!

To preorder the game : https://www.spielworxx.de/produkte-shop/
In US the game should be available at the BGG Store.

To have a look at the Rulebook (now available) : https://www.spielworxx.de/downloads-regeln/