A long time ago in a game far, far away... [Lost STAR WARS games rediscovered]

A list of the Star Wars games you never knew existed!

Posted on the eve of "Star Wars Day", this list will collect the unauthorized games of the Star Wars universe -- from unlicensed video games, to the obviously "inspired by" board games, to untested 1980s homebrew RPGs -- anything other than official major releases is fair game (plus semi-obscure things like magazine games and fast food give-aways are probably worth a mention).

I'll start the list off with some examples, and you can take it from there... and while we're at it, let's hear about your unpublished/prototype Star Wars games as well!

May the 4th be with you!

Patron Badge for 2004 through 2009
An iconic example of what this list is all about.

In 1978, Michael Scott Kurtick released this independently produced game of galactic conflict. In classic seventies small-press style, this hand-illustrated ziplock game depicts the climactic attack on a space station that was not featured in any popular movie released right around the same time.

Type I and Type II fighters launch an attack against the giant Expiration Sun. The mapsheet depicts a portion of the surface of the Death Star Expiration Sun that includes a trench. The station is defended by Type III and Type IV fighters. 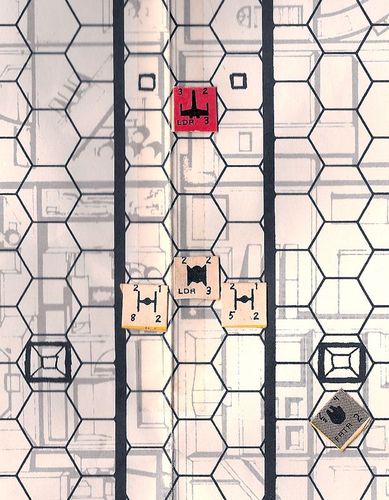 What's with that unusual shaped freighter at bottom right???

The cover of the rules folder depicts a "Type I" fighter attacking a "Type III" fighter. You get the picture...

You also have to love the familiar looking S in the game's title... major chutzpah award goes to Mr. Kurtick! 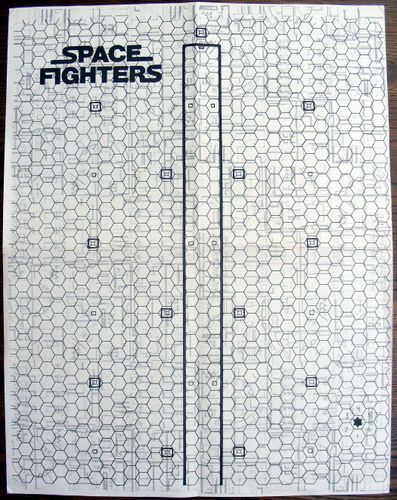 A trench runs across the surface of the Imperial space station

Patron Badge for 2004 through 2009
This unlicensed 1986 board game from Hungary depicts the escape from the Death Star. The Rebel player must rescue the Princess, escape the trash compactor, deactivate the tractor beam and have Obi-Wan fight Darth Vader.

The Imperial player tries to stop the Rebels and blow up the Millenium Falcon. 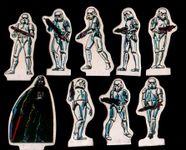 That game board sure looks like it came from a galaxy far, far away!

Patron Badge for 2004 through 2009
This 1981 strategy game for the TRS-80 microcomputer is credited to Stan Schriefer. The game is particularly notable for presenting an original story set in the Star Wars universe rather than simply recreating portions of the movies.

"The Republic is at its last days. Darth Vader is slaying all the Jedi warriors and the end of knighthood is drawing near. It is now up to you! You must stop Darth Vader and end his nasty ways! You can only do this by building your fame and having the people on your side. Collect donations and make friends with the Rebel merchants. They can help you! But do not let the men of evil get past you. The Republic is depending on you!" 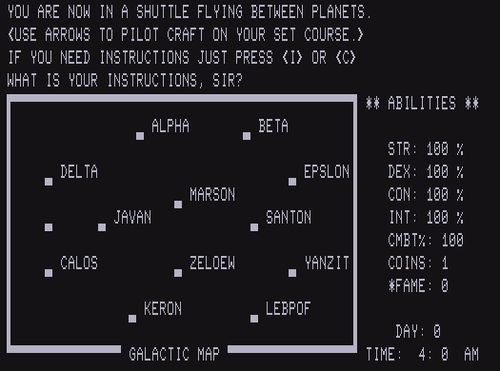 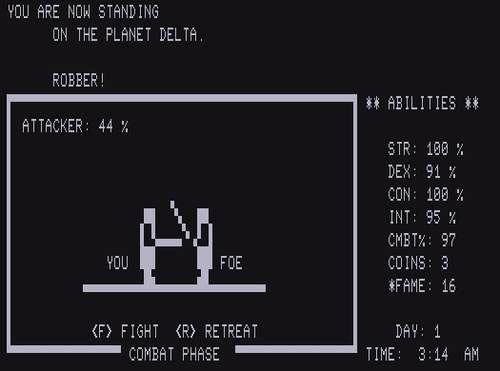 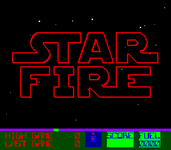 Patron Badge for 2004 through 2009
Shameless borrowing was also going on in video arcades. From the familiar title logo to the enemy ships (shaped like TIE Fighters), the inspiration for Exidy's Star Fire couldn't have been more clear.

Unlicensed or not, the sit-down cockpit cabinet, throttle lever and full-size control yoke (equipped with a big red fire button) made Star Fire everything a wannabe X-Wing pilot could have asked for in 1979!

Blasting a fighter of some TIE type.

"Jedi is an original RPG that used to be based on the Star Wars universe. It is simple, complete, and has been over 25 years in the making. Rules cover Character Creation, Aliens, Droids, Combat, Skills, Vehicles and starships (of all sizes), Force Powers and skills, World Creation, and much more. Uses 6-sided exclusively for simplicity."

"This game is available for free - there may never be a charge."

"After my game was pretty much done, which was before West End Games had the license, I started hawking it to different game publishers, and tried getting permission to do so from Lucasfilm and Kenner (the holder of the game & toy rights at the time). Neither would talk to me until I got permission from the other. As I continued to push, I got a “friendly” little cease-and-desist order (Included at the end of the book) that scared the bejeebeez out of me. So I ceased and desisted. Until now."

The Empire Strikes Back: Lightsaber Duel card game recreates the epic duel from the end of the second Star Wars movie.

One player is Luke and the other player is Darth Vader. The object is to defeat your opponent through the play of attack and defense cards. In addition to generic attacks and defenses, there are cards featuring various elements from the film. Either player can win by killing or carbon freezing the opposing player. Vader can also win by converting Luke to the dark side. It's all or nothing in this fast-playing filler game -- no "drop down the hatch to the Falcon" ending here!

We had fun testing this one out and got a lot of games in at school and during downtime at work. It was followed up by my Death Star Battle card game (Luke vs. Grand Moff Tarkin). While the Death Star game used similar mechanics, I never got it to flow as well as the lightsaber game.

Patron Badge for 2004 through 2009
Illustrating the category of "clearly inspired by", Freedom in the Galaxy was an SPI wargame portraying a galactic struggle between "a small but valiant band of rebels" and "the Empire." 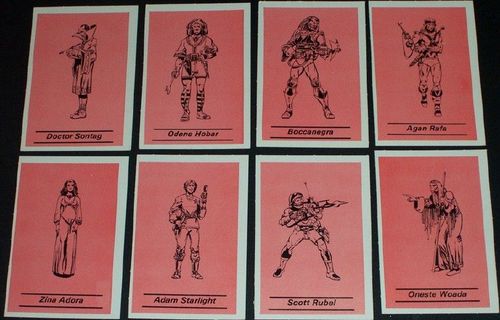 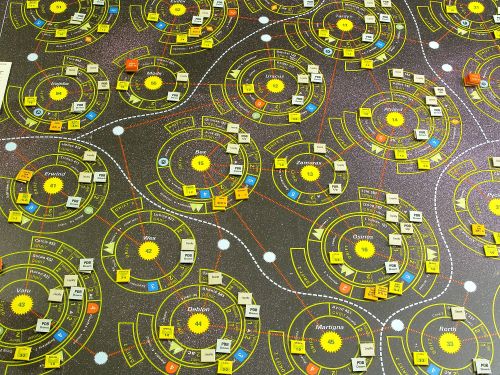 Another "out of this world" mapsheet!

Patron Badge for 2004 through 2009
This 1979 supplement for GDW's Traveller RPG included stats for eight characters "drawn from the pages of science-fiction", including a "Young Farmboy" and an "Imperial Leader."

The description for the Young Farmboy sounds kind of familiar: "This individual joined the rebellion against the Empire as he seeks out the murderer of his father and the true story of what happened."

As does the Imperial Leader: "This individual is charged with suppression of the rebellion . . . it is reported that the life support system he wears constantly is necessary as the result of a fall into a volcano." 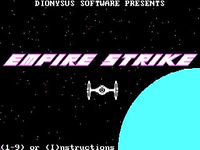 Patron Badge for 2004 through 2009
And here is another one of my unofficial Star Wars designs.

Empire Strike is an unreleased "for friends and family" arcade shooter I programmed back in 1987. It is a CGA graphics program for the IBM PC. Not one of my best efforts, but still playable today courtesy of DOSBox. 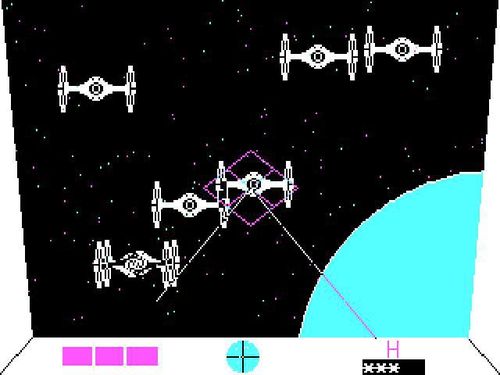 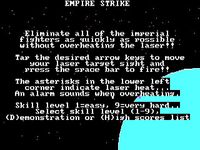 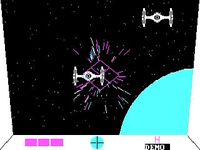 Patron Badge for 2004 through 2009
An interesting third-party magazine game designed by Dan Verssen. An authorized release, but maybe not on your X-Wing's radar.

"A solitaire Star Wars boardgame focused on the exploits of a galactic smuggler flying a Corellian ship, in the style of Han Solo and the Millenium Falcon. There are six scenarios of increasing difficulty, with varying victory conditions. Published in Shadis magazine issue 27."

Patron Badge for 2004 through 2009
Stan Schriefer programmed this strategy/action hybrid that was released for the TRS-80 in 1980. Unlike his later Jedi Knight, the Star Wars influences are more subtle here. Douglas Carlston's early 4X game Galactic Empire may have also provided some inspiration for this game.

"The Orion galaxy is now controlled by the strict rule of an ambitious dictator. With the military and space services loyal to him, as well as the local governors, opposition has all but disappeared. Yet, there is a small band who continues to resist. Their goal: to bring back democracy and to make it work!"

"Now, as the Rebel Leader, your goal is to defeat the forces of the dictator and help the rebellion gain victory. The duties are not easy! As a warrior, you must fight and defeat all 10 capitals to win! Remember: the rebellion is counting on you!" 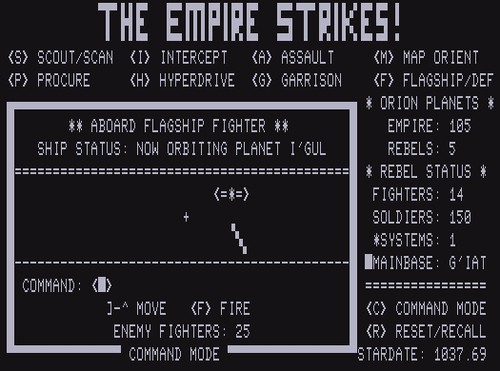 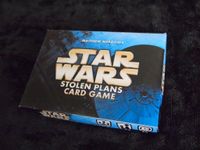 Patron Badge for 2004 through 2009
The homebrew trend lives on, as illustrated by this fan-created, free print-and-play design from 2006.

"Players will take turns to draw a card, or play a card, trying to acquire the droid carrying the rebel plans. Once a player has possession of the droid card they will soon discover that keeping hold of it is a different challenge." 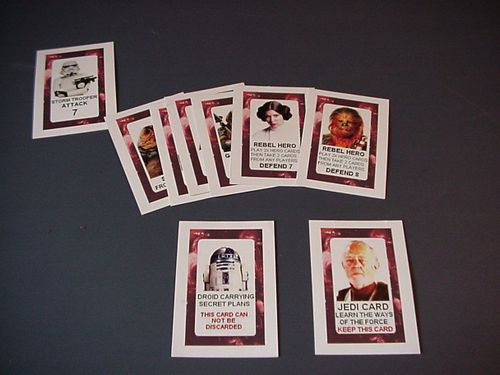 Patron Badge for 2010 through 2020
An authorized release since it appeared in Star Wars Gamer magazine issue #3, but may not be well known.

The is a reskin of the Silent Death star fighter miniatures combat rules (from Iron Crown Enterprises) for use in the Star Wars universe. Includes stats for all of the fighters + the Falcon up through RotJ.

PDF available by copying and pasting the following link into your browser address bar: http://replay.web.archive.org/20060913232852/http://www.wizards.com/starwars/downloads/SW_Silent_Death.pdf 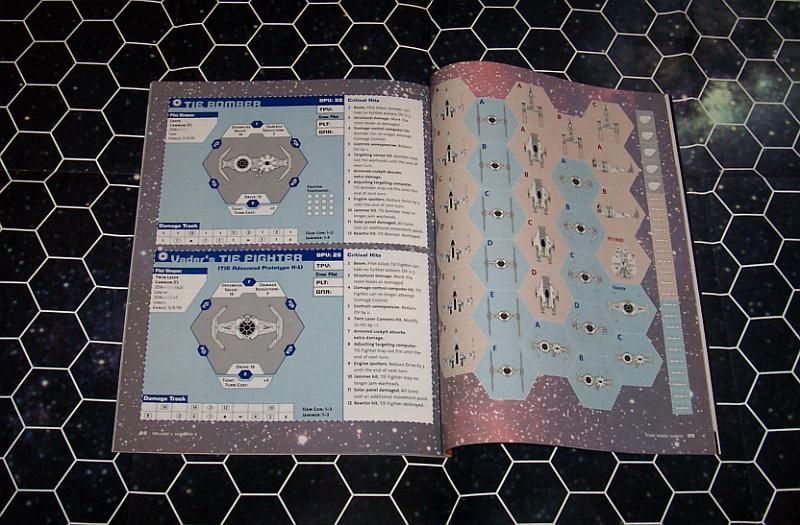 From the back cover:

"Attack Force minigame is a fast and exciting space combat game for two players. YOU, as leader of the dashing Arcturan pilots, must use your knowledge of the Novaship's only weak point to destroy it before it reaches Arcturus. YOU, as the commander of the Novaship, must use your lasers, blasters, and pom-poms to keep the Arcturans at bay until you can launch your Cobra Starfighters and destroy them!"

"Vaj Korsen" can even enter the battle and help to destroy those pesky Arcturans! Sadly, there is no freighter that can swoop in to save the day, but I'm sure many fans made their own variant.

"It is pitch black. You are likely to be eaten by a grue."
Patron Badge for 2012, 2016, 2019
Richard Garriott's Ultima was famously based on his early Dungeons & Dragons campaigns but also turned out to be a mind-blowing amalgamation of D&D, LotR, Dr. Who, Star Trek and, yes, even Star Wars.

The player could not only equip his character with a "Blaster" and "Landspeeder" but, in the later stages of the game, was required to leave the planet in a starship to battle TIE Fighters. Who new that Sosaria was really a backwater planet in the Galactic Empire!

Garriott's D&D games must have been glorious! 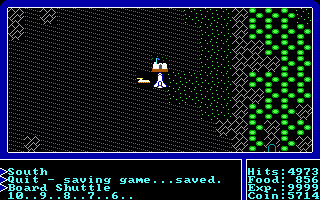 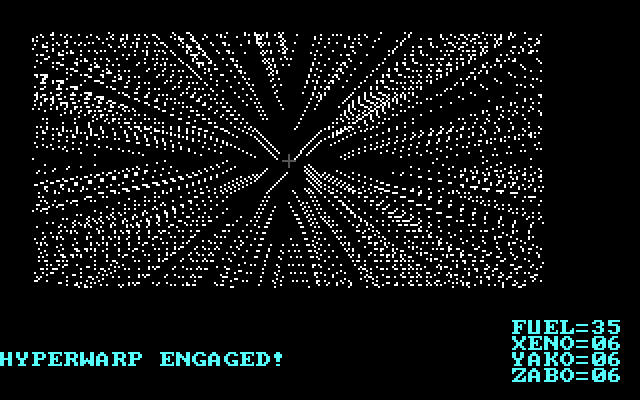 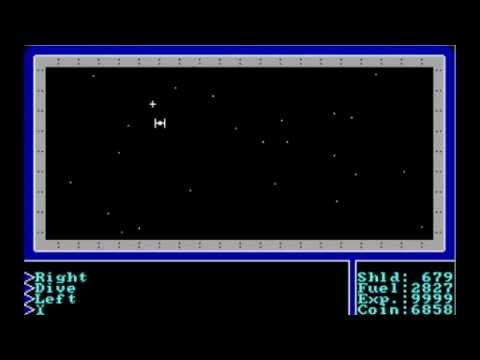 Patron Badge for 2010 through 2016
A favorite of mine from the Atari 2600, it too had the TIE-fighter knock-off ships. This game had the distinction of adding a touchpad to the controller for the 2600 - high tech! 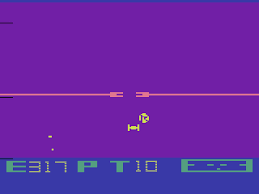 If I remember correctly, the purple screen meant your shields were up. 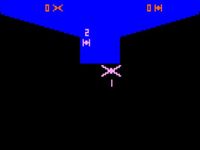 You want to know something? I don't think Mozart's going to help at all.
Patron Badge for 2004 through 2020
This is one of the earliest video games I can remember playing with my dad on our Bally system. A duel game in the Death Star trench, with a really neat perspective dynamic. Tie Fighter vs. X-Wing...classic!

(Is it weird that--almost 35 years later--I can still remember exactly how it plays?)

Pod racing miniatures rules using Micro Machines toys or Lego. First published on the designers' website (but no longer avaliable). The core rules was also published in the Fanzine; Ragnarok.

Patron Badge for 2007 through 2021
So, we're flying Star Destroyers. And that is an interesting looking fighter on the cover. Still, I'm sure this is unrelated to any Stellar Warfare movies that might be out...

Patron Badge for 2004 through 2009
This 1979 text adventure from Lance Micklus was inspired by the rescue of Princess Leia from the Death Star (early versions reportedly used character names from Star Wars, but in the commercial release you must rescue "Princess Leya" from General Doom's battle cruiser). It was originally published in the May 1979 issue of SoftSide magazine as a type-in program named Dog Star Adventure. Later it was picked up by Adventure International who sold it as Death Planet.

"The evil General Doom and his Roche Soldiers are ready to launch an attack against the Forces of Freedom, led by Princess Leya. Enroute to a secret command center on the planet Harris 7, Princess Leya's ship was attacked by Doom. She is now being held prisoner on one of his battle cruisers. It is a sorry day indeed!" 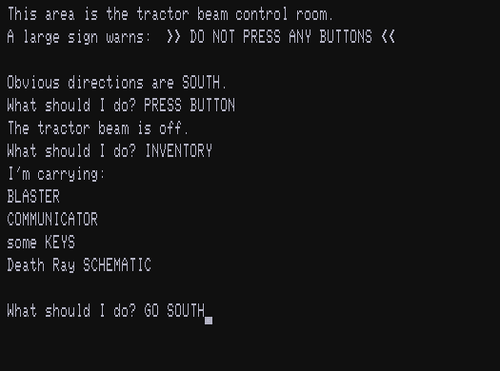 A set of rules for pod racing for WipeOut or Star Wars games. It suggets that you can ether use miniatures or counters for the racing pods.