Having modded for a while and seen some very nice pictures get rejected by the court of canaille here at BGG, and disappear into the detention room of private galleries I thought I would call some of them forth again for everyone to enjoy. This time the idea would be that you'd get something in return for your efforts. I have gathered some geekgold to give away (by having the luck of nice moderators) and will gladly distribute them (as well as every tip given to this list) to the struggling and garroted photographers among the BGG community. The one that gathers the most thumbs up for their picture get the biggest price (actually consider it more a scholarship) and so forth...

Inspired by Legomancers competition for accepted pictures, I employ a similar rules system for rejected pictures:

1)It should be a rejected picture (or alternatively a picture you never uploaded because you knew it wouldn't be accepted.)
1b) state the reason for rejection if you remember

3) It must be a photo (not a scan) that you have taken yourself.

5) Users may vote (give a thumb up) to as many entries as they wish.

6) users voting are free to make their own judgments outside of the mod-rules and naturalised BGG conventions regarding the value of aesthetics and what constitutes "relevant" game pictures. For example people actually playing games are highly relevant in this context, quirky, out of focus, or not-enough-cleavage-too-much-ugly-bloke, this competition is about that.

7) Winners will be announced on the 8th of September (I had to push this forward with one day because of other engagements).

8) The following prizes will be awarded:

And thanks in advance to any tipper who find it in his/heart to support the alternative photographers on BGG!! 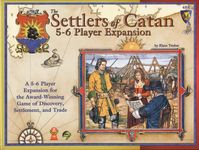 Patron Badge for 2004 through 2021
It was Easter Sunday, 2005, and my side of the family was visiting. We had quite a few people there, and were just about to start a six player game of Catan, when my (then) two-year-old daughter came to the table to see what was going on. My wife took this photo as I was telling her about resource costs. I thought it was cute, so I submitted it, but it was rejected. It's been more than two years since then, and I don't remember the reasons for its rejection. Maybe it was the layout of the tiles we used that day, which was not quite standard? 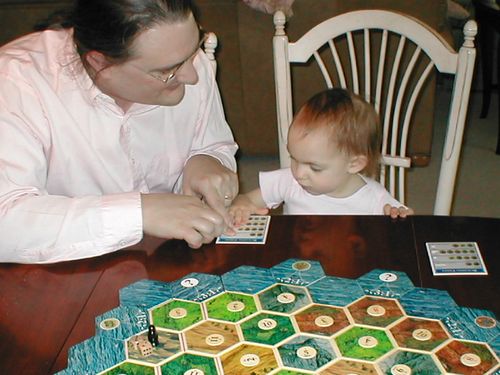 My comment:
I suppose I should have seen this rejection coming, because I knew that the game itself is only a small part of the photo. But that's really the whole point of this picture - it's all about the context of the game, and I submitted it because of what it says about the essence of Magic. In full screen size you'll see that all the summer essentials are there - beach, waves, sand, swimsuits, sunshine, sunglasses, and sunscreen. And yet these two players are opting to play Magic the Gathering (the cropping focuses on their hands and the cards to accentuate the gameplay), seemingly oblivious to their surroundings. To me, that says a great deal about the power of this game. 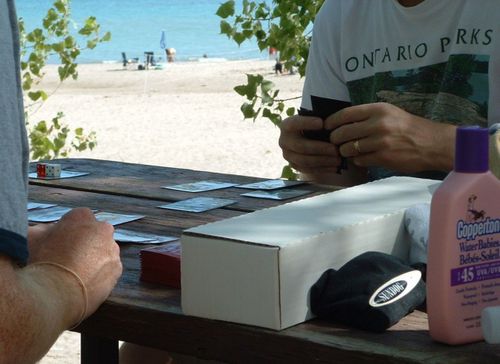 I suppose the mods had good reason to decline it, but it's still an interesting picture in what it says about Magic the Gathering.

Patron Badge for 2005 through 2021
I don't have a wide choice, since only 11 out of the 705 images i uploaded were declined. Full list of them (with my comments) is here.

I think the cover art in the alea big box series deserves more attention. So when i uploaded better box cover images, i also uploaded a cover art detail shot. Some were accepted; this one was declined.
Reasons: duplicate / too similar / irrelevant.
(click here for full size) 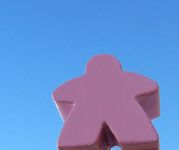 Patron Badge for 2007
This was submitted in a very lighthearted spirit. Given the overabundance of meeple photos, I'm not at all surprised it was rejected as irrelevant. In any case, it was supposed to be a tribute to Gollum who has submitted all those great photos of game bits (like pirate ships) taken from below with nice blue sky in the background. Apparently the modders didn't get it. I don't blame them, but I still like my pink meeple. 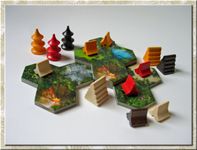 Go Take A Hike!
Patron Badge for 2005 through 2021
While trying to get a good shot of Taluva I played around with the image in PaintShop Pro and liked the sketchy/hand-drawn look of it. However, it was rejected as irrelevant so I uploaded the real image. 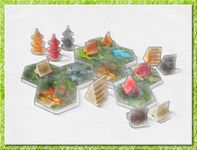 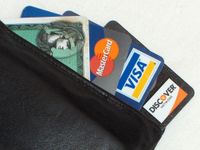 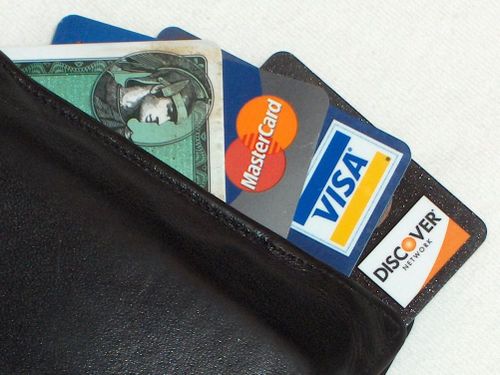 Created for amusement value . . . rejected by the modders (who probably did the right thing).

(Not a great image. But it's my only rejection.) 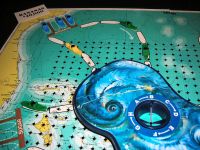 Patron Badge for 2004 through 2020
I took this image during a recent game of Bermuda Triangle with my 7yo daughter. I think it was rejected as irrelevant. Oh well.

Need a cool Graphic Design for a game you are Creating ? Maybe a banner for a kickstarter ? Ask for a quote... questions are for FREE :D
Patron Badge for 2007, 2012 through 2013
I wanted to add some flavor to the pics taken but didn't work with the staff anyway, I call it "The March of the Ents at the Dusk of Men" 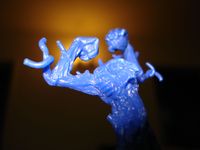 I accept to similar, I don't see the bluriness in it.

(I also think this one was quite good

http://poeter.se/galleryExhibitionPic.php?picId=32591 (But I get the blur and bad glare on it) 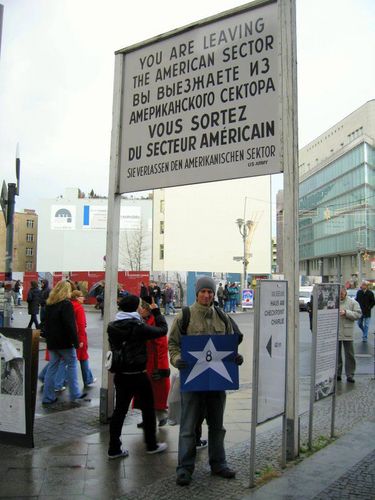 Patron Badge for 2004 through 2021
The caption explained that this depicts the Asteroid Impact event. While certainly not my "best" photo, I was sure the lively depiction of the explosion that could decimate a continent would meet with approval.
Quote:
We're sorry that we couldn't use the recent image that you uploaded to BGG related to '', and it was removed it from the system.


Sincerely,
BGG Community
Oh, well. Such is the nature of the geekmod system. At least one user was so charitable as to explain, rather than just pan my photo for geekpennies.

The most unfortunate aspect of geekmod is when users with no clue about a game accept photos that are not of that game, or reject photos that are. It would be interesting if the geekmod system could give extra weight to people who have actually logged plays of the game. 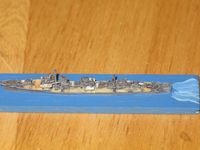 Patron Badge for 2007 through 2009, 2011 through 2012, 2014 through 2018
This image was rejected for being a duplicate. It's not, this and the representative image above (another one of mine) are two different destroyers, each about 1.5 inches long. If you look at the one below you can see the white stripes I painted on the stacks, not too shabby for a model that size. 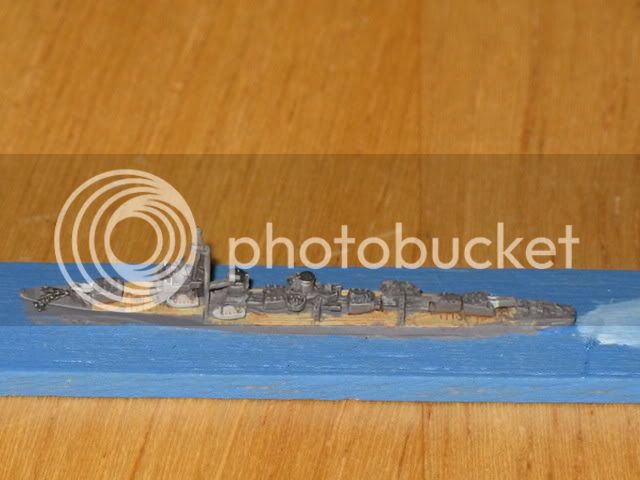 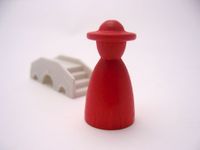 Oh well. I'll try again in a couple of weeks.

and also the old favourite

Reason: The image was irrelevant to the subject.

This is a small sample form the sheep getting ready to be boxed for the 1st edition of shear panic. We painted each base, put a dot on each of their backs before mounting them (onto the bases, of course

Gordon and I both get nervous flashbacks when we think of the production work we did, one of the many reasons we now use Ludofact to produce our games. Unfortunately I don't have a better picture (we were all too busy working) and this one is quite poor...but you get the idea.

16. Board Game: WWII: The Struggle for Europe and Asia [Average Rating:8.36 Unranked]

jefF, There are some who call me... DuneKitteh
(midnightmadness)
United States
Wood Dale
Illinois
Dune Kitty really does love you, despite any asshattery.

Useless rollover, booya! Dune Kitty says, "deal with it."
Patron Badge for 2004 through 2021
After GenCon, I was looking for games I took photos of that didn't have many "in play" images, and I was surprised to find this game had none. So I uploaded 3 images. Two got accepted, this one didn't. 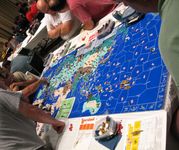 Reasons:
Reason: The image was sideways or upside down.


I figured hey, fair enough. I did actually rotate it in order to see the board better, but it's only obvious if you look at the people in the background. So I simply resubmitted using the original.

And I got rejected again, only this time with a veritable shopping list of reasons.

Comments (optional):
I think it's on purpose, but it's unpleasant to look at.


I find it amusing I got the sideways/upside down again, but that throw in comment was worth its weight in (geek)gold - quite simply my favorite rejection comment EVER.

Though I have no clue what the "corrupted" bit was, probably a problem with someones browser.

I cut my losses and figured there was pretty much nothing I could do to make this image acceptable to the masses (i.e. make it look "right") and moved on.

And if you never have, you should. These things are fun and fun is good.
Patron Badge for 2005 through 2015, 2017 through 2020
If I see 1 more silly Carcassonne picture allowed I'm going to freak. I think the modding system lacks for a lot but I understand its all we have.

This picture was negated. I spent money on shirts and ironed the names of the powers on them for Superman's sake!! The shirts are color-coded per the power color. 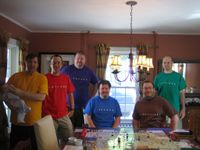 I thought I was the biggest nerd of them all!

Check the discussion out in the wake of it being crushed:

Patron Badge for 2006 through 2010
I uploaded this many times, and it always got rejected. I suppose because it has no sense of scale. But these are the four tile racks, and there aren't any other reasonably close photos of them.

Needle
(nnf1)
Australia
NSW
Patron Badge for 2005 through 2020
This was rejected as too similar. OK It's CrackeD ICE, that's the game. In fact I was asking if this was some sort of record because there are a hell of a lot of bits on there 5 Big, 6 medium and 11 small pieces and was an enthralling 3 player game. 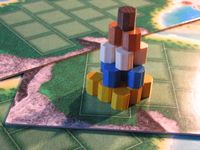 Juha N.
(Lutz)
Finland
I can't remember the exact details but it was something about the glare and too much artistic pictures in the game galleries... 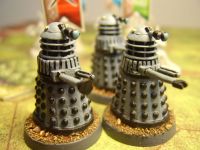 the title was something like: Scarab-Lore, a new type of mounted ostrich (expansion not to come!) 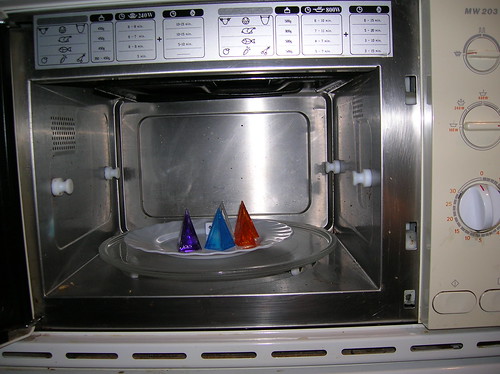 It was under the name of "Hothouse"


Comments (optional):
Please explain why it's in the microwave?

A photo of the actual pigeons in Piazza San Marco, Venezia, October 2005, which I captioned and everything. It wasn't relevant to the game. No Meeple, No Love, I guess.

I have fun with this game, running down the halls doing bad impressions of bad actors. How can you go wrong?

Patron Badge for 2007, 2015
Here is one where I tried to remake the TOI insert into being more useful for storing the game contents: 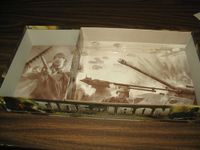 This was considered "too similar", "overexposed" and "irrelevant". I did not even try after that to submit these following ones. Here is a step towards getting there: 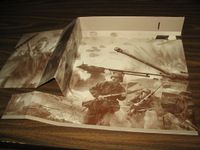 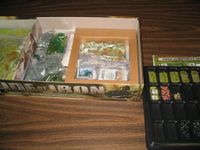 The thread about all this: