One of the goals of the Wargame Bootcamp is to introduce gamers to games that they have not played before or would not have normally been able to play; this is achieved by hosting and teaching games on-demand. We provide the game, our knowledge of the game and it's rules and then teach the game to anyone who wants to play it, when they want to play it. If required, we even provide the opponent who can both teach the game and play the game in a friendly and informative manner.

Games that we have ran as Participation Games include: 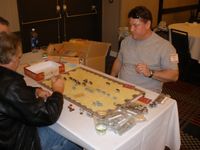 The States of Siege tournament at Gamex 2010 (Strategicon) was a great success with over 40 games played. These quick playing games by Victory Point Games attracted all types of new and old wargamers in a tense leader board tournament to see who could score the most points across a variety of games. 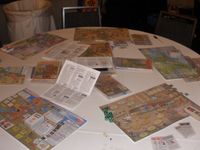 Recently we have chosen one game to be the Featured Game as each convention. This game is one that we believe would be a popular choice and recently published. If the game is a competitive game, as opposed to a co-operative game, that we have held a tournament based around the Featured Game.

Participants in games are awarded tickets that can win Raffle Prizes; the number of tickets is awarded based on the amount of time and how many games the participant takes part in the bootcamp. 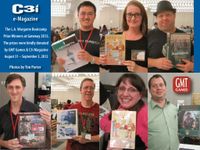 We are lucky enough to be provide raffle prizes by the generosity of game companies, such as GMT Games, DVG, VPG and C3i magazine.

Games with great gameplay and strong visual appeal are used to draw the attention of non-wargamers to the bootcamp; they create discussion and generate interest amongst non-wargamers. The demonstration games are longer duration games that are well suited to be played over the duration of a convention. This demonstration game have also been ran as audience participation games where people can play for as long or as short a time as they have available. Bootcamp volunteers staff and run the game to provide a continuous game flow.

Wargame Bootcamp
Putting the fun back into history 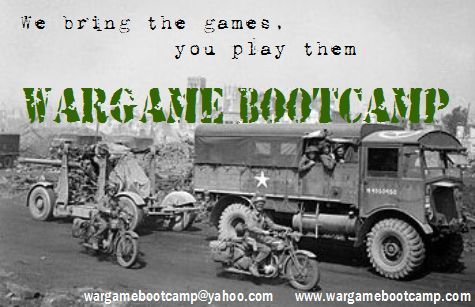 Many thanks to Bobby Doran for some of the logos.