...and welcome to the fifth review in this series.

In my review I will try to shed some light on different areas that I find important for any game I might be tempted to buy. In this way I hope to inform people who are tempted to buy this game, but feel unsure if it's a game for them.

Napoleon: The Waterloo Campaign, 1815 (N:TWC) is part of Columbia's succesfull block game series. In this type of game your have square wooden that have a unit sticker on one side only, so that the exact type of unit and its strength is hidden from your enemy (effectively creating a fog of war). Because the blocks are square, you can flip side to indicate the current strength of the unit, allowing a max 4 differtent strenghts per unit block, without your opponent being able to see the difference.

The box is strudy but rather unimpressive as is the rulebook.

The blocks are high quality put the stickers would (in my opinion) have benefited from full color pictures of actual troops (like in Command and Colors: Ancients or Wizard Kings).

First image is of N:TWC blocks, with the regular symbols representing troop types.

Second on is of C&C:A, with actual figures on the blocks 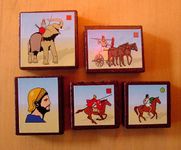 The maps are based on a system that allows troops to move from 1 town to another as opposed to from 1 hex to another. They are not mounted but have an adequate look and quality. 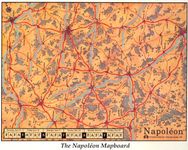 There is also a special (smaller) battlefield map provided where units are placed once battle is joined.

The rulebook is clear and easy to understand. After 1 play, there's hardly any rulebook refering at all.

The difficulty level is medium so the game can be enjoyed by newcommers as well as seasoned wargamers.

The historical mix of troops are present (infantry, cavalry and artillery) as well as the commanding officers (Napoleon, Wellington, Blucher).

The games are about maneuvering the right troops to the right spot on the right time to deal a devastating blow to your enemy or to cut his communication lines.

Once battle is joined, it is usualy swift and deadly. There's litle or no building going on as opposed to other block games like Wizard Kings and Victory: the Blocks of War. Keeping in mind that the campaign only lasted for 100 days, this is perfectly acceptable though.

I will not go down into a summary of the rules as this would take me to far from the aim of this review.

The game does a very good job at making players relive those exiting days of th Waterlo Campaign...but little else than that.

The rules do not provide lots of different scenarios or a real long term campaign setting. The aim of the game is to relive the Waterloo Campaign,which does signify a rather low replayability value.

There also no solitary gameplay at all.

Luck always plays a factor in a game where you need to roll dice.

In this case, however, strategy and tactics will almost always prevail.

Having a battleplan, rather than just reacting to your opponents, really help you along with the decisions that you have to make.

Which troops to move where is just one decision. You have to keep an eye on your supply lines and your opponents and in the case of the French, you really should try to fight only 1 army at a time.

Napoleon needed a BIG win at that time. The allies should try to stall, regroup and fightthe French together.

I'm a Napoleon fan and this game has found a place in my collection. It's probably the waterloo game that sees the most table time as not all of my friends are interested in playing more detailed and complicated simulations.

I like the blocks system and especially the way they are adapted for this setting.

I would've liked to see a better production value though, especially for the stickers. As this game is a medium-wargame it would benefit from a nicer look and feel, attracting a more light wargame crowd.

If you look around a little, you should be able to pick this one up a lower than averga price.

If you don't have a good Waterloo game yet and you have an intert in the Napoleonic era...I would definitely advice to pick this one up!

It's ideal to introduce newcomers to wargaming in general without resorting to games that feel more like a boardgame instead of a wargame.

If you're looking for a really detailed, in depth simulation of Waterloo, you might look elsewhere.


I hope to have given some potential buyers an insight into the game, without going over the rules (which can be downloaded and have been discussed elsewhere).

Other reviews in this series:

PS: English, obviously, isn't my native language...so excuse any mistakes or lack of style. And the starts..;they are out of a maximum of 5

Tom, are you familiar with the other editions of this game? If so, how does this edition compare? Thanks,

Compared to the Avalon Hill edition, the Columbia edition adds more blocks and turns, cleans up the rules a bit and adds a few new rules such as leaders. The movement rules are adjusted to account for the larger armies.

The Columbia edition is slightly more realistic and takes a little longer to play, but it's still not a hard-core simulation or a long game. The game seems to play a little better if you use the optional historical setup as it's a little too easy for the Allies using a free setup to just run out the clock, which was very risky to try in the Avalon Hill edition.

R Larsen
(RLarsen)
Denmark
Naerum (Copenhagen)
Tom, thanks for the nice review.
Could you tell a bit more about how the supply rules work - what happens when you are out of supply? And about the Leaders - what do they do?
Cheers,
Ras

Life may knock you down sometimes. Its up to you if you stand up and live your life to the fullest.
Patron Badge for 2009 through 2013
Nice review.

One thing I want to say is that the blocks that you would like to see differently is in my opinion a personal opinion. I really do like the stickers as they are now.

Its a great game which gets too little playtime on my table. Because of your review I will put it on again.

Patron Badge for 2010 through 2013
Thanks for the review. I worry about re-playability especially in the era of minis we are in.

I also agree that the production is less than desired... the map especially.

In comparison, I love Napoleon's Triumph... the map is large and top notch and the longer rectangular blocks make it look, once setup, like a real battle map.

Robert Stuart
(bob_santafe)
United States
Los Alamos
New Mexico
Patron Badge for 2012
There is no supply. There is, however, what one could call 'supply attrition': For every turn in which the French hold Ghent, Brussels or Liege, the Allies lose one or more blocks of their choice -- the blocks are simply removed from the board. Once an Allied army (any army) is reduced below about 1/2 its starting number of blocks, the entire army deserts and is removed from the game. There is now a special rule (influenced, perhaps, by two games which I played as the French) that if the French hold all three supply cities, Ghent, Brussels and Liege, by the end of the game, they automatically win.

Robert Stuart
(bob_santafe)
United States
Los Alamos
New Mexico
Patron Badge for 2012
jrtracy wrote:
Tom, are you familiar with the other editions of this game? If so, how does this edition compare? Thanks,

Each is a very good game in its own right. They are different enough, however, that I have kept both versions. The first edition is a true gem. It plays quickly, and requires all sorts of wonderful things: strategy, tactics, deception, and nerve, especially for the French. The only problem is that it's 'broken': if the Allies set up on the back line and play conservatively, they can win. There's an easy way around this, and it makes for a more exciting game than free set up: randomize one or more of the initial Allied group placements. Number the cities in each bivouac region from 11 to 66 (there are two bivouac regions, one for the Anglo-Dutch and one for the Prussians). Roll two differently colored dice, and set up a group on that city. Depending on the relative strengths of the players one could randomize the set up of only one group in each army, all the way up to all groups in both armies, in this fashion.

The third edition, with more units, takes longer to play and is a bit more forgiving of mistakes. In my view it has all the marks of a great game without quite achieving greatness, for three reasons:

I have written a new set of rules which I'll post shortly and which, I feel, makes Napoleon both a more challenging game and a better simulation. (I posted the rules on the Columbia website a few years back, but they don't seem to have gained much traction. However, one can always try again...)

One final comment: whichever version I play, I use the 1st edition mounted map. There's one difference between the two. On the 3rd edition map the Escoult River flows east of Oudenaarde, and on the 1st edition west (and off the board) -- but that's easy to remember when playing Edition 3 with the Edition 1 map.

I too enjoy this game. I think I have the 1st Avalon Hill Version. I would be interested in looking at the other 2 versions. Plus I would be keen to see you rule revisions , have you made them available ?

Patron Badge for 2005, 2007, 2010
landru wrote:
Thanks for the review. I worry about re-playability especially in the era of minis we are in.

I also agree that the production is less than desired... the map especially.

I think that this is more than rectified in the latest (4th) edition from Columbia Games.