- Remove the CallForReinforcement, Short Supply and
ConstructFieldworks cards, they are not used in this scenario.

- Cross sabers hits only in melee;
Except: Single Leaders are hit also with sabers in range fire, as the
standard BC rules says).

Zulus: Prevent the British Victory (Destroy all british troops, before they get 7 VP) 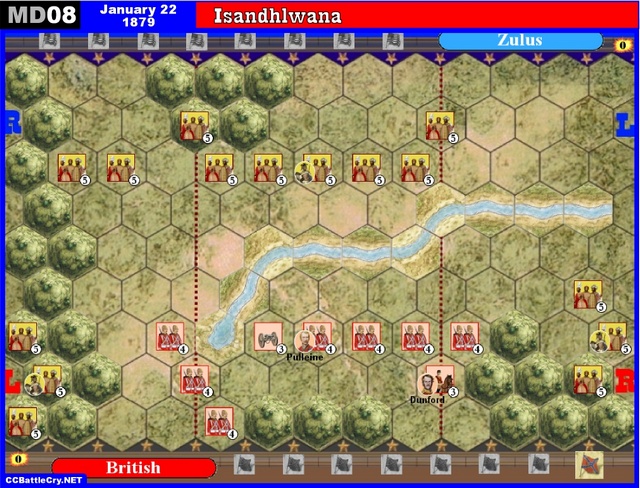 King Ludwig II of Bavaria
Re: Isandhlwana
I will also test the BC system next for the European Wars
(Austro-Prussian War; Prussian-French War)

This is a fun scenario Micheal, especially for a British Colonial raised in Africa and living in the cape

First off it looks great set, up with a handful of redcoats facing a board full of Zulu's. I initially thought that the British would be severely hampered command wise as they would all be forced into the center section, but as it turns out they weren't.

I was playing solo and wanted a quick game, just to get the feel of it, so I devised a simple, but surprisingly effective, method of play:

1) On the Zulu turn I played 2 cards and moved the Zulus according to both, however no unit could be ordered twice.

2) On the British turn I drew one and played it.

3) Battle back was held for the next battle and a new card drown to replace it.

The British held on the left, under the command of Lt-Col. Pulleine, were down to only one figure by the end of the game but held valiantly, a Victoria cross is on the next mail ship to Natal.

The British Right, led by the Natal mounted Police, took the fight to the Zulus, holding the High ground. The Natal Mounted Police payed with there lives but the infantry Line held without casualty.
The Zulus were pinned in the center by Artillery fire as they attempted to ford the Tugela River, until a forced march order brought the surging into the British Center.
The survivors all retreated to the hill and had the advantage of firring down on the Zulu's below.

The British losses were originally, heavy but the tide turned and the final score was 8:5

A fun scenario, and it certainly gave the feeling of a desperate struggle against an endless wave of native forces.

BRING ME THE HEAD OF SETH NEMEC AND RIK FALCH!!!!!!

In Memorial: Moose, my dog. B:? D:01/13/16. He died peacefully surrounded by those who loved him. You will be missed.
Re: Isandhlwana
What figure sets would you suggest for the British and Zulus?

King Ludwig II of Bavaria
Re: Isandhlwana
There are some manufacturers, 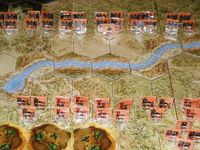 Well, because i had already counters for my Vassal-Editor, i used them also finally for the boardgame 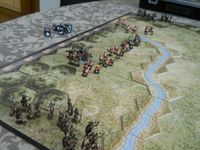 I overworked the scenario setup a little, see above.
And i started to paint some miniatures

Here a view on the British Defence

Phill Webb
(Freeloading Phill)
Australia
Melbourne
Re: Isandhlwana
Ooh. We played the old version just a few weeks back and the British had an easy time of it.

To give the Zulus more oomph I thought of adding a Zulu Wave Attack rule - basically the US Marines rule from Memoir'44, but I think 5 hits per unit may well give the same relentless attack feeling and this revised version looks like more of a challenge.

Our play of your Rorke's Drift was a slaughter although the British did make it through three and a half waves after being down to 2 units after the first wave.

- Remove the CallForReinforcement and ConstructFieldworks card, they
are not used in this scenario.

- Cross sabers hits only in melee

Zulus: Prevent the British Victory (Destroy all british troops, before they get 7 VP)

This looks great is there a Vassal mod at all?

King Ludwig II of Bavaria
Re: Isandhlwana
Quote:
This looks great is there a Vassal mod at all?
Use the search function and you will find this thread

Chad K
(Starslayer)
United States
Pennsylvania
Re: Isandhlwana
Thanks for the scenarios and the list of miniatures! Great stuff. I appreciate your hard work.