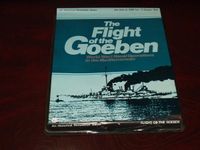 Flight of the Goeben is a 2-player S&T magazine game, which depicts the cat-and-mouse game played between the small German task force (the titular Goeben and escort, Breslau) and the entire British Mediterranean fleet. Historically, the Goeben and Breslau eluded their pursuers, making their way into through the Dardanelles to Turkey, bringing the Ottomans onto the German side and, according to the rules, prolonging the war by 6-12 months!

Though it was released as a boxed game, my version is the magazine edition, and it was therefore a DTP product. This was the quickest game to build of all, so far, though I want to make a more deluxe version some time. I just printed out the two maps and two time/damage charts, and I printed the British and German ships on construction paper, which I then glued to posterboard and cut out. When I make the pretty version, I may color it in. There are very few counters: in the basic game, the Germans have two warships and three colliers. The British have seven warships, and the French have three warship group counters and three transport counters. This all makes Goeben a very portable game, ideal for coffee-house playing!

As usual, Lorelei did the box art. 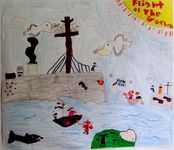 Flight of the Goeben seats two players (though perhaps more could play in the advanced game). A typical (basic) game takes 2-4 hours. The Germans start in the Adriatic or Ionian seas three days before war has broken out between the British and the Hun. All of the British ships start out in Malta. The game is played in 6-hour turns from August 2 to August 12, during which both sides have variable (and secret) objectives. In fact, the Germans do not know their victory conditions until they make a secret die roll in the middle of August 3, and the British don't know theirs until the end of the same day. The Germans have one overriding goal--to get their ships out of the Mediterranean before the game is done. The secret die roll determines whether more points are gotten for going East or West. The Germans also get points for shelling French African ports and for sinking the transports carrying the 19th Colonial Corps from three different ports in Africa. The British have similarly variable victory conditions, but they ultimately matter less. Basically, the British get more or fewer points for preventing a German escape to the East or West, and more or fewer points for getting the transports safely to France. At the end of the game (once the Germans have escaped, been sunk or time runs out), whoever has the most points wins.

The game is played blind, like Battleship, with each player having his/her own copy of the board--a strategic hex map of the Mediterranean. Ship-to-ship combat is handled simplistically, though provisions exist for using the strategic game as a scenario-generator for detailed tactical ship combat. Tactical rules, based on Pratt's naval game, were published in the same issue. I have not played them yet. One could ultimately use any tactical rule set they like.

Goeben really breaks away from the old operational hex-and-counters and ZOCs dynamic. Each turn, both sides move their ships simultaneously, 1-3 spaces per turn.. Each ship has a finite amount of fuel, which gets burned up at increasingly rapid rates as speed increases. Ships refuel in ports (the British can refuel in French ports, the German at Pola in Austria-Hungary; the Germans can also refuel slowly and illicitly in Italian ports or, somewhat faster, my linking up with one of their three unarmed colliers). After all movement is concluded, if a player's ship entered a coastline or port or strait, he/she must inform the other player of this fact. Except at night--then there is a 50/50 chance of making the move without being spotted. Night turns take place on last six-hours of every day. British ships cannot move along Italian coastlines because the Italians are neutral.. sort of. The Germans have no such restrictions.

After movement, a player may search for the other. First, the player calls out the Sea he/she has a ship in. If the other player has a ship in that sea, he/she must report the fact. The searching player may then elect to call out the Area (subdivision of the Sea) containing a ship. Again, the other player must answer. Finally, the searcher may call out the Hex a ship is in. If both sides have ships in the Hex, combat may occur. At night, the searched player has a 50/50 chance of not having to report his/her ship's position. The same is true if the Hex being searched contains islands. As can be seen, searching is a two-way street. The more specific the searcher is, the more information he/she passes on to his/her opponent. The German colliers act as decoys as much as anything else as the British might chase one all over creation thinking it's the Goeben. Once a ship is found, it can be pursued rather than detected in the conventional fashion. The German ships tend to outrun their British counterparts, but it takes a lot of fuel.

Combat (forbidden until war breaks out on August 5!) is handled very simply. Each side rolls a die for each ship and potentially does damage to an opponent. Big ships must fight big ships first. Little ships get an adverse modifier when attacking big ships. Little ships get sunk quickly. Big ships can take speed and armament damage before sinking.

There are special rules governing the French ships in the basic game. The French battlegroups start in Toulon and, on August 3, make their way slowly to three different African ports, where they will escort the transports back to Toulon. Once the convoys are underway, they can be attacked by the Germans. The French get two shots at the Germans, and if the Germans survive (likely at least the Goeben will), the transports are sunk.

The Advanced game allows for all of the Mediterranean major powers' navies to come into play, and the French get real ships rather than escort counters. Both sides also get to roll on the What-If tables, and all sorts of neat alternatives can happen, including the British and Germans getting extra ships to play with.

Even the basic game presents a wide variety of strategic options. The tricky part is neither player knows what it needs to do at first. It's easier for the British, who need to cover all of their bases. The Germans have to watch out as, if they gamble too strongly on one direction early on, they ay find they have to go clear across the map to get any victory points. Using the night turns is essential to keep one's moves a secret. The Germans have to wisely use their colliers not only as mobile fuel depots but as decoys. It is a tense nail-biter for both sides: for the British, the Germans are elusive buggers who could be anywhere, and there are too many spots on the map that are far enough from Malta to be untenable stations for the coal-hungry vessels; for the Germans, the British seem to be everywhere, and the colliers are easy, slow targets.

In the two games I've played, it seemed like a lost cause for the Germans early on both times, and yet, in the first game, the Germans won a comfortable victory, and in the second, lost by the very narrowest of margins. In other words, it ain't over until it's over. 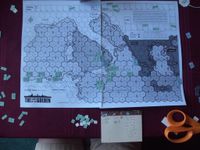 This is the first S&T game that really hits it out of the park. It's innovative (sort of--the blind game idea had been done in Midway and Bismark), fast, and very playable. Strategy does not become quickly stereotyped. I do not know how the advanced game plays yet (I suspect it is superfluous), nor have I tried the tactical game (which seems like it would only really be fun in the advanced game). Even just taking the basic, strategic game, Flight of the Goeben is really quite fun, and it doesn't show it's age at all. Highly recommended.

Mike D
(porkbelly)
Thailand
Nakhon Nayok
Patron Badge for 2012
Nice work Neo!
Your game reviews are making me want to take all these out for a spin myself. Now I just need to figure out how to play this one solo

This is the first S&T game that really hits it out of the park. It's innovative (sort of--the blind game idea had been done in Midway and Bismark), fast, and very playable. Strategy does not become quickly stereotyped. I do not know how the advanced game plays yet (I suspect it is superfluous), nor have I tried the tactical game (which seems like it would only really be fun in the advanced game). Even just taking the basic, strategic game, Flight of the Goeben is really quite fun, and it doesn't show it's age at all. Highly recommended.

I agree completely that tFooG hits a home run. I've enjoyed it many times over the years, and I've used it -- I think successfully -- as a gateway wargame. Definitely one of the best S&T magazine games I own (and I own more than 50). The graphics may be primitive, and the rules not up to later S&T / SPI standards, but it's a great game.

It may look hopeless as the badly-outnumbered German, but the point is not to shoot it out with the British. You're absolutely right that the colliers make useful decoys.

I wouldn't say that the advanced game is superfluous, since it does add interesting variation, but yes, I'd agree that the basic game has enough replayability.

I've been meaning to get this out onto the table for several months now, and I've been looking forward to your review since the day you started your S&T play-off. Thanks for a very good review of one of my old favorites.

Patron Badge for 2006
porkbelly wrote:
Nice work Neo!
Your game reviews are making me want to take all these out for a spin myself. Now I just need to figure out how to play this one solo

Seems this game would be ideal for e-mail/Skype play. Maybe we can arrange it some time!

Sounds like a plan, I'll drop you a PM.

. Then I wanted to add a tactical board too.

Either way let's get this puppy on the virtual space and give it a whirl. You've got my email.

Really? One of the things I like about Goeben is how few bits there are!

My Lorelei is 7, and I think she's almost old enough for the game. Maybe in a few months.

You guys are making me nostalgic - I'll have to step into my time machine and go back and play some of these with my old buds in the 70s again.

You guys are making me nostalgic - I'll have to step into my time machine and go back and play some of these with my old buds in the 70s again.

Why not play it with your old buds now?

At the very least, maybe you can enlighten us with some of your better anecdotes...