How does the first edition differ from the second?

The main difference is that the map graphics and layouts have been redone. Here are the EastFront maps side-by-side (second edition on the left): 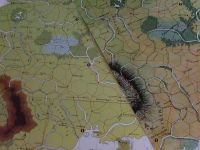 Another comparison (second edition on the right):

For EastFront or WestFront games, you'll need a little more table; the new maps are twice the size of the old ones! (This is mostly because they include MedFront: War in North Africa 1940-43 and VolgaFront: East of EastFront 1942-43, but partially because new areas have been added to the maps.) However, for full EuroFront games, you'll need a little less table. First edition needs 4' by 7':

The second edition includes more map area in the mideast and northern Europe, but a little bit less Eastern Europe than VolgaFront did.

The second edition also includes a few more blocks, and the labels have been slightly improved.

What do I need in order to cover various parts of the war in Europe?