Q: What is the second option on the USA's card?

A: The second option on the USA's card ("bomber -> $3") allows you to sell 1 bomber for $3. Move the counter on your bomber track down 1 space and collect $3 from the General Supply.

Q: If I use a permanent laborer to activate China's card, can I use the card's action to immediately retrieve it?

A: No. If you use a permanent laborer to activate the China Nation Card, it must stay on the card. More importantly, the card does not allow you to retrieve scientists or engineers - only laborers. So, if you place a laborer on this card the best it will do will be to retrieve your other 3 laborers. If you place a scientist or an engineer on this card, it could potentially retrieve all 4 of your laborers.

Q: Can Japan always use fighters as bombers? For instance, can it use them as bombers when making an air strike using the main board action space? Can it use a fighter instead of a bomber to load a bomb?

A: No. Japan's fighters can only be used as bombers when it uses its Nation Card to make an air strike. When Japan uses the main board air strike space, it is just a normal air strike. In fact, every nation's special power is limited to the exact moment when its card is activated. All nations play by the same rules any other time.

Q: When using Germany's Nation Card, can I use the retrieved scientist/engineer on the Main Board? Can I use it on the same building that I just retrieved it from to activate it twice?

A: You may not use the scientist or engineer on the Main Board. You are in Step 2 of your turn when you activate the Nation Card. In Step 2 you can only place workers on buildings. You may, however, use the worker you just retrieved on the same building it came from, effectively activating the same building twice in the same turn. This will only work on single-worker buildings, as the other worker(s) on the building would not be retrieved by the Nation Card.

Q: [cont'd] ... Ok. What if, as Germany, I had activated Espionage on Step 1. Then on Step 2, I activate an opponent building that takes either 1 engineer or 1 scientist. Then I use the Nation Card to retrieve that worker. Then I activate the same opponent building again. I understand that with Espionage I am limited to a number of opponent buildings that matches my Spy Level on the track. Does double-activating the same building count as 1 or 2 buildings?

A: As you pointed out, your Spy Level on the Espionage track indicates how many opponent Buildings you may activate on Step 2 of your turn. Double-activating the same building is still only activating 1 building. (It's the same building, see?) So this effectively only uses one of your "spies." You could potentially use this trick the very first time you activate Espionage in the game. 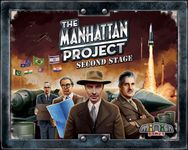 Q: Can I use South Africa's ability to dismantle a bomb that I have already loaded?

A: Yes. You may dismantle a loaded bomb, but you may not load a dismantled bomb.